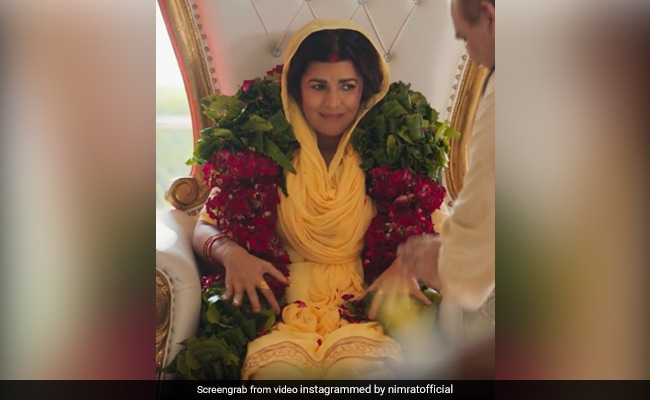 Nimrat Kaur in a still from Dasvi. (courtesy: nimratofficial)

Nimrat Kaur is on cloud nine. After all, it’s not every day you get an appreciation note from Amitabh Bachchan. Yes, you read that right. Big B has congratulated Nimrat for her “exceptional” performance in the film Dasvi.  Nimrat has shared a picture of the handwritten note and flowers on Instagram. It read, “ We have hardly any interactions or meetings. The last was a compliment I gave at an event at YRF- for the Cadbury AD. But your work in Dasvi is exceptional- nuances, gestures, all. My deep admiration and congratulations.” A moving gesture, indeed.

Along with this picture, Nimrat wrote, “18 years ago when I set foot in Mumbai city, to imagine that Mr Amitabh Bachchan would know me by my name, recall us meeting and him appreciating me in a television commercial and years later send a note and flowers for something I attempted in a film – all would’ve been but a distant dream, perhaps someone else’s for me, not even my own.” Actor Ali Fazal has reacted to the post with a “wowowowowowowowo”. Actress Surbhi Jyoti said, “Oh my God…Many many congratulations.”

Dasvi also starred Abhishek Bachchan and Yami Gautam. The plot revolves around Abhishek’s Ganga Ram Chaudhary. He is a chief minister who lands in jail. Nimrat Kaur plays the role of his wife in the film.

Dasvi released on April 7. It is currently streaming on Netflix. The film is directed by Tushar Jalota.