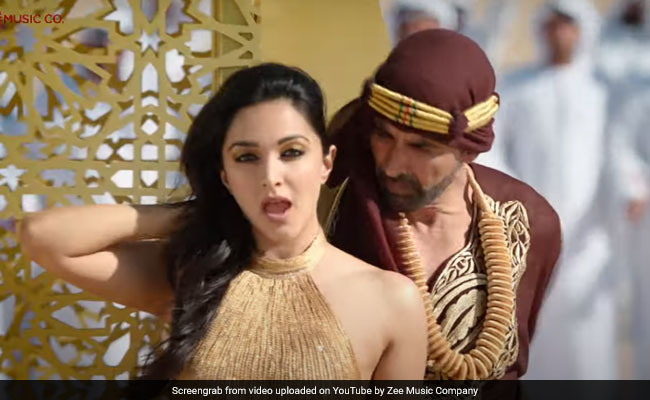 Burj Khalifa: A still from the song. (courtesy YouTube )

The first song from Akshay Kumar’s upcoming film Laxmmi Bomb, released on Sunday and it started trending instantly. The song titled Burj Khalifa, is the first track to release from the film. It features the film’s lead actors Akshay Kumar and Kiara Advani. In the video, the duo dance their hearts out and how. The song has been shot at multiple locations, including the one mentioned in the title- Burj Khalifa, which appears in the backdrop in a few scenes. The duo is also seen dancing amid a dessert, with multiple costume changes. Throughout the course of the video, Akshay tries to impress Kiara and he does succeed at the end. Sharing the song on social media, the film’s lead actor Akshay Kumar described Burj Khalifa as “the biggest dance track of the year.”

The horror-comedy is a remake of the 2011 Tamil film Kanchana and it has been directed by Raghava Lawrence, who also helmed the original. Laxmmi Bomb is slated to release on November 9 on Disney+Hotstar. The film will also release in Australia, New Zealand, UAE in cinemas, while it will premiere on Hotstar in USA, UK and Canada.

Akshay Kumar, earlier said that his role as a transgender has been the most “mentally intense” in his three decade-long career. “This is unlike any character I’ve ever played. I had to be careful to portray this character with utmost honesty, without offending any community,” Akshay Kumar said in a statement earlier this year.