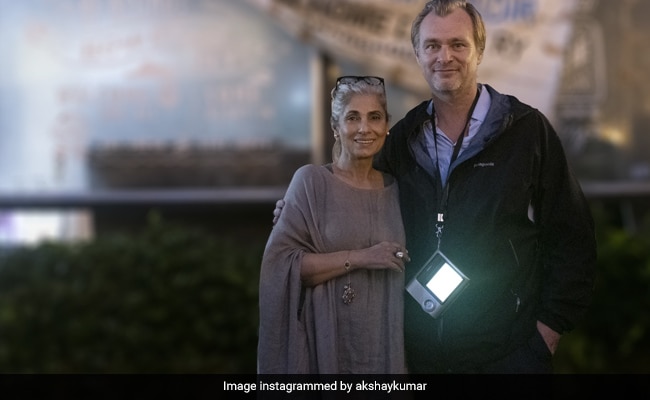 Akshay also attached a glimpse of the letter from Christopher Nolan to Dimple, which said: “What can I say? Working with you has been a delight. Watching you bring Priya to life all around the world has been fantastic. Thank you for your great skill and hard work and for lending your talent to Tenet.”

Here’s my proud son-in-law moment! #ChristopherNolan pens a heartfelt note to #DimpleKapadia on the eve of their release.Had I been in her place,I wouldn’t have been able to move in awe but having watched her working her magic in #Tenet,I couldn’t be more happy and proud of Ma ♥️ pic.twitter.com/EgSehxio1I

Ahead of Tenet‘s release in India, Christopher Nolan addressed fans in India in a video message. Speaking of the scenes shot in Mumbai, he said: “What I considered to be some of the most exciting scenes in the film, some of which were with the great Dimple Kapadia. We had an amazing time shooting in India and it means so much to me that you are all finally going to be able to see Tenet on the big screen. So, I hope you enjoy it. Thank you very much.”

In an interview with NDTV recently, Dimple Kapadia opened up about her experience of working with the internationally acclaimed filmmaker. Talking particularly about her audition, Dimple said: “The audition started and when I saw Mr. Nolan holding the camera for my audition, that was a huge moment for me. I just told myself at that point, even if I don’t get the part I will treasure this moment that Christopher Nolan is holding the camera and taking my audition, that’s huge! And when I found out that I got the part, then I was terrified. I was asking myself – ‘How will I pull this off?’ There was a lot of anxiety and nervousness.”

On Diwali, Akshay Announces New Film Which “Will Connect Generations”

WandaVision didn't have a
Read More