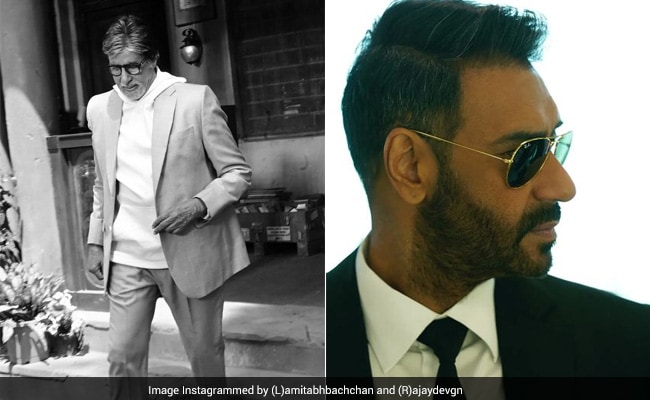 Amitabh Bachchan and Ajay Devgn stopped Twitter traffic with their online banter. The Runway 34 co-stars will soon be seen locking horns on silver screen. But before that, they attempted to hilariously troll each other on the microblogging platform. Amitabh Bachchan shared a photo of Ajay Devgn from the 1991 film Phool Aur Kaante. In the film, Ajay Devgn pulled off an iconic stunt where he performed a slit while resting his legs on two moving motorcycles. On a light note, Big B accused Ajay of breaking rules. He wrote, “Sirji inka record hi hai rules todne ka. Range haathon guilty paaye gaye ho Ajay Devgn, ab kya doge iska jawaab (Sir, his record is to break rules. Now you’ve been caught red-handed, Ajay Devgn. How would you explain this to us)?” Big B also added “Runway 34” as a hashtag.

That’s where the banter started. Ajay Devgn surely did not miss out on the chance to give his comeback to this post. The actor replied to Big B by sharing a still from the 1975 iconic film Sholay. In the photo, we see Amitabh Bachchan riding a motorbike while co-actor Dharmendra sits on his shoulders, playing the harmonica. Ajay Devgn’s caption read, “Sir you were saying.”

Sir you were saying… ???? https://t.co/mfqLQRVsUJpic.twitter.com/K8mOjVPW6e

The banter surely grabbed the attention of Twitter users and celebrities. Actor Abhishek Bachchan, Amitabh Bachchan’s son, reacted to the post with this comment, “Hahaha. Loving this banter.”

Actress Rakul Preet Singh also commented on the post. She too is part of Runway 34. Referring to Ajay Devgn’s role in the film, Rakul Preet wrote, “As always Capt. Vikrant is on top of his game.”

As always Capt. Vikrant is on top of his game 😉 #Runway34@SrBachchan@ajaydevgn

Runway 34 is directed and produced by Ajay Devgn. This is his second directorial venture after Shivaay in 2016. The film also stars It also stars Boman Irani, Angira Dhar and Aakanksha Singh. It is scheduled for a theatrical release on April 29.