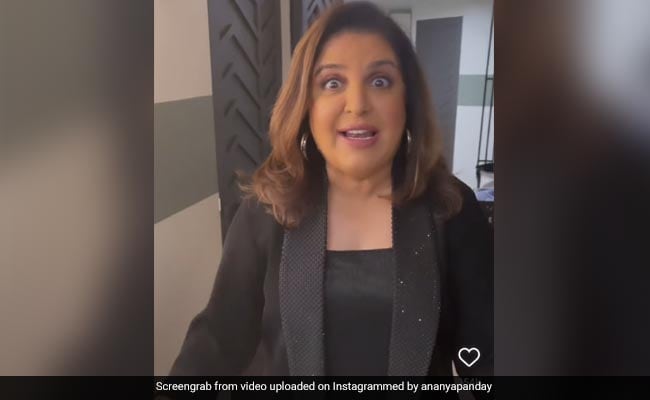 Farah Khan in a still from the video. (courtesy: ananyapanday)

Ananya Panday shared a super fun video on her Instagram profile on Tuesday, which also features choreographer-director Farah Khan. The video begins with Ananya Panday introducing herself, when she is interrupted by Farah Khan, who exclaims, “Ananya, Ananya, you have won the National Award for Khaali Peeli.” When Ananya gets all excited, Farah Khan says, “I am joking” ( just the way Chunky Panday’s character Aakhri Pasta says in the Housefull series of films). Ananya captioned the video: “50 rupay kaat overacting ke. Always the funnest time with Farah Khan.” All in good humour, of course.

The highlight of the post, however, is Farah Khan and Chunky Panday’s ROFL Instagram exchange. Ananya’s dad Chunky Panday commented: “Farah you should get the award for overacting in this video.” Farah Khan’s reply: “Apni beti ko sambhal pehle.”

Check out the video here:

Farah Khan, who stepped into the Indian film industry as a choreographer, made her directorial debut with the 2004 film Main Hoon Na. She has also directed films like Om Shanti Om, Tees Maar Khan and Happy New Year. She also backed Netflix’s Mrs Serial Killer, starring Jacqueline Fernandez and Manoj Bajpayee. The film was directed by Farah’s husband Shirish Kunder.