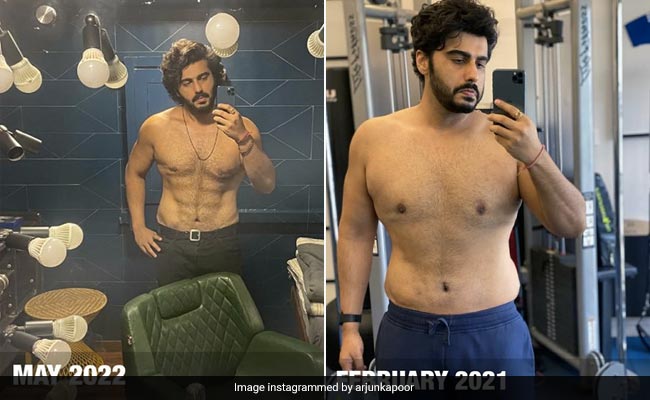 Arjun Kapoor’s Monday Motivation post that was shared today eclipsed all the other ones that he had been posting for a while (15 months to be precise). The actor shared two pictures on his Instagram profile – taken 15 months apart – one happens to be from February 2021, the other one is from May 2022. The recent one has a glimpse of Arjun Kapoor’s abs. He captioned the post: “15 months of being work in progress. Felt cute and definitely won’t delete later because I’m immensely proud of this journey. Feb 2021 to May 2022 – it’s been a tough one and I’m only glad that I could stay on track. “

The 36-year-old actor wrote in his post that the journey of his transformation was anything but easy. He added, “Must admit that it was very tough to stay on course, it still is, but I’m loving the state of mind that I’m in for these past 15 months. I hope it stays the same. My #MondayMotivation is now me and not others on the gram loving themselves. It’s been a while since I have felt this way!! This is me this is who I am (chest hair included).”

Check out the post shared by Arjun Kapoor here:

Speaking of Arjun Kapoor’s work in progress posts, the actor had been sharing glimpses from his fitness journey on Instagram. Check out the posts here:

Arjun Kapoor was seen in the horror comedy Bhoot Police with Saif Ali Khan, Jacqueline Fernandez and Yami Gautam. Last year, the actor starred in Sandeep Aur Pinky Faraar, in which he shared screen space with Parineeti Chopra. He also featured in Sardar Ka Grandson. He will next be seen in Ek Villain with Disha Patani, Tara Sutaria and John Abraham. He will also star in The Lady Killer with Bhumi Pednekar.