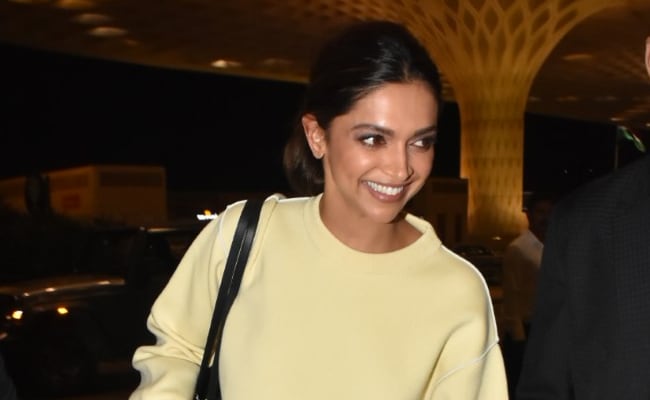 Deepika Padukone pictured at the airport.

Deepika Padukone is on cloud nine as soon she will be representing India at Cannes Film Festival as one of the jury members. Last night, the actress was snapped at the airport as she jetted off to France for Cannes. In a viral video, the actress looks gorgeous in a beige co-ord set with embroidered sleeves. Sporting a no-makeup look, the actress tied her hair into a ponytail and completed her look with black boots. As Deepika heads inside the airport, a paparazzo can be heard saying, “You are making India proud,” followed by others congratulating her. To this, the Piku actress happily replies, “Thank you”.

Cannes, which will be held between May 16 to May 28, announced the jury a few weeks ago. The jury includes Vincent Lindon as a President, and competition members include Deepika Padukone, Asghar Farhadi, Noomi Rapace, Rebecca Hall, Trinca, Ladj Ly, Jeff  Nichols and Joachim Trier.

Announcing Deepika Padukone as a jury member, Cannes described her as, “Indian Actress, producer, philanthropist, and entrepreneur Deepika Padukone, is a huge star in her country. Actor, producer, philanthropist, and entrepreneur from India. With over 30 feature films to her credit, she made her English language film debut as the female lead in xXx: The Return of Xander Cage, co-starring with Vin Diesel. She is also the principal of Ka Productions, the production company behind Chhapaak and ’83, in which she also starred, as well as the upcoming film The Intern. Credits include Gehraiyaan and Padmaavat, as well as the award-winning and critically acclaimed film Piku. In 2015, she set up The Live Love Laugh Foundation, whose programs and initiatives aim to destigmatize mental illness and raise awareness about the importance of mental health. In 2018, Time Magazine named her one of the 100 Most Influential People in the World.”

Meanwhile, on the work front, Deepika Padukone has several films in her kitty- Pathaan with Shah Rukh Khan and Fighter with Hrithik Roshan.