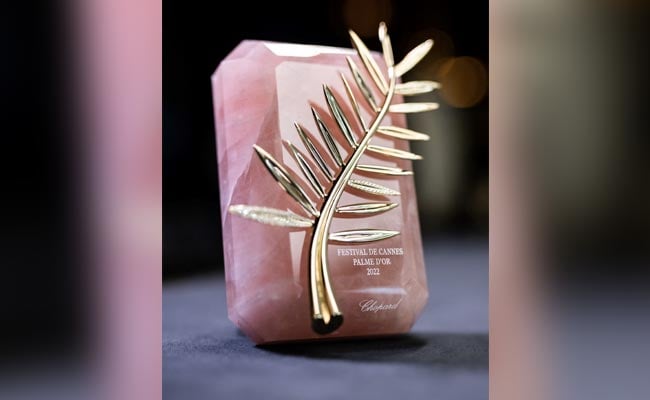 Winners will be competing for The Palme d’Or trophy. (Image courtesy: AFP)

This year’s Cannes Film Festival has 21 films in competition, including movies from four past winners of the top prize Palme d’Or, as well as several cult favourites. The festival starts on Tuesday, with the winners to be announced at the closing ceremony on May 28.

Crimes Of The Future

The horrible genius behind The Fly and Crash, David Cronenberg returns to his body horror roots with a tale starring Viggo Mortensen, Lea Seydoux and Kristen Stewart about people indulging in revolting surgical alterations for artistic and sexual pleasure. Buckets at the ready.

The king of cringe, Sweden’s Ruben Ostlund took a scalpel to modern bourgeois niceties with his Palme d’Or-winning “The Square” in 2017. In a similar vein, his latest places two models and a cleaning lady on a desert island with a group of billionaires.

The enfant terrible of Russian film and theatre, Kirill Serebrennikov fell foul of authorities with his caustic attacks on conservative values and was barred from travelling to Cannes for two previous nominations. Now in exile, he should be present for his historical tale about the famous composer.

James Gray has made big sweeping dramas, from space odyssey “Ad Astra” with Brad Pitt to Amazon adventure “The Lost City of Z”. This one is based on his adolescence in 1980s New York and a school governed by Donald Trump’s father, starring Anne Hathaway and Anthony Hopkins.

Japan’s Hirokazu Kore-eda won the Palme d’Or in 2018 for his beautiful and touching family tale “Shoplifters”. Featuring the star of “Parasite” Song Kang-ho, this one is about people dropping off infants in “baby boxes” to be looked after by other families.

Park Chan-wook had an international hit with nightmarish thriller “Old Boy” that won him the runner-up Grand Prix in 2004. This time, the South Korean brings his unique stylings to the familiar trope of a detective falling for the prime suspect in a murder investigation.

Kelly Reichardt has gradually built up a cult following with her mini-masterpieces about life on the edges of American society, including 2019 sleeper hit “First Cow”. She is reunited with her favourite muse Michelle Williams for a self-reflective look at a small-town artist trying to overcome distractions.

Belgian brothers Jean-Pierre and Luc Dardenne make simple but devastating slice-of-life stories and are among a handful to have won the Palme d’Or twice. Their latest follows the friendship of two African teenagers exiled in Belgium.

One of France’s most lauded auteurs, Claire Denis is having a busy year, having already won the directing prize at this year’s Berlinale. Her Cannes entry is a political thriller set in Central America starring Robert Pattinson.

Romania’s Cristian Mungiu won the Palme d’Or in 2007 for his bleak but vital abortion film, “4 Months, 3 Weeks and 2 Days”. This one explores ethnic and political tensions in a remote Transylvanian village.

Belgium’s Lukas Dhont won the Camera d’Or newcomer award in 2018 for his debut “Girl” about a trans ballet dancer. Here he tackles two teenagers separated by a tragedy.

A daring film about power struggles in the leading centre of Sunni Islam, the Al-Azhar University in Egypt, from Swedish director Tarik Saleh.

Having won the Un Certain Regard section in 2018 with Border, Danish-Iranian Ali Abbasi heads for the Iranian religious city of Mashhad where a family man seeks to rid the streets of prostitutes.

A tale of love, life and tragedy in a Paris theatre troupe against the outbreak of AIDS in the 1980s from French-Italian director Valeria Bruni Tedeschi.

Marion Cotillard stars in a drama about feuding siblings brought back together by the death of their parents, directed by Cannes veteran Arnaud Desplechin.

Iran’s Saeed Roustaee made a splash last year with his punchy cop thriller “Just 6.5”. His new film examines the economic struggles of a family in a country hit by international sanctions.

Following a donkey from the circus to the slaughterhouse, this treatise against animal cruelty is from 84-year-old Polish director Jerzy Skolimowski, who was first in competition at Cannes in 1972.

France’s Leonor Serraille follows a Senegalese mother from the 1980s to the present day as she tries to establish a life in the Paris suburbs.

A story of a lifelong friendship between boys and their rural home from Belgian husband-and-wife team Felix Van Groeningen and Charlotte Vandermeersch.