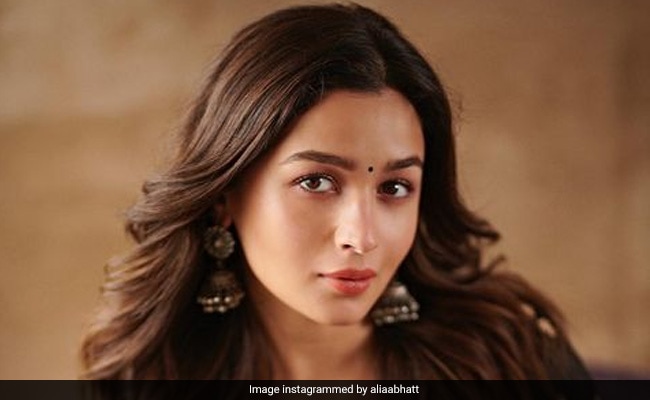 Alia Bhatt is super busy with the promotional campaign of her upcoming film Darlings. The movie also marks Alia’s debut as a producer. And, she is not leaving a stone unturned. The Jasmeet K. Reen directorial will release on Netflix on August 5. The film also stars Shefali Shah and Vija Varma. Well, in the middle of the promotional events, Alia is also making heads turn with her OOTDs. From pantsuits to baggy jeans, Alia is making everything look just perfect. On top of that, the pregnancy glow has added stars to her overall appearance. In the latest set of pictures, Alia is giving major desi girl vibes in a black salwar kameez set. For the caption, Alia has just used a black heart emoji.

Alia Bhatt then picked her husband, actor Ranbir Kapoor’s blazer for one of the Darlings events. Oh yes. She actually did. She has teamed her shimmery mini dress with Ranbir’s blazer. And, oh boy. She looks stunning. Alia’s caption deserves equal attention. “While the husband was away — I stole his blazer to complete my look today — thank you my darlings.” And, the experiment got a thumbs up from her family and industry friends. Mother Soni Razdan left a bunch of red hearts. Pooja Bhatt declared the look “Hawwt”.  Ranbir Kapoor’s sister, Riddhima Kapoor Sahni said “prettiest”. Ananya Panday was in complete awe off.

Speaking about what led to the beginning of her journey as a producer, Alia Bhatt told NDTV, “It was on my mind, maybe it’s a nice time for me to start producing the films in which I play like an important character or maybe it’s nice to me to start looking at stories a little differently, I don’t know. It all worked out.  When I heard the narration of Darlings, it was such a surprising film, I was taken in by how the genre just shifted very, very quickly was a very unique story.”

Alia Bhatt will also be opposite Ranbir Kapoor in Brahmastra. The two will be sharing screen space for the first time.