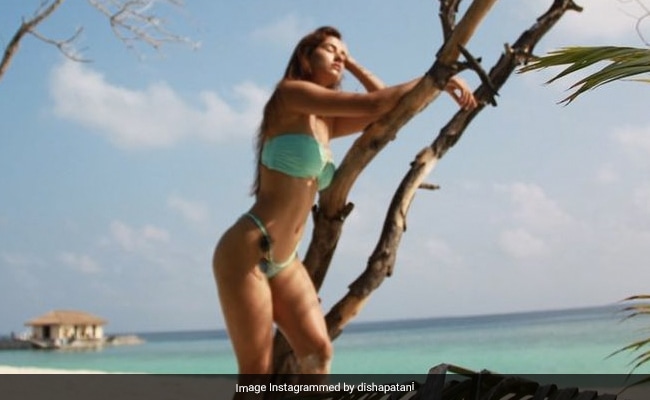 Disha Patani set the Internet ablaze on Wednesday by sharing a stunning throwback picture of herself from her Maldives vacation. The actress, who was holidaying with Tiger Shroff in the beach destination November last year, shared an unseen picture from her trip and left her fans in awe. In the photo, Disha, sporting a blue bikini, can be seen sun-bathing on the beach. With her fit physique, Disha Patani never fails to give us fitness goals. Within minutes, the comments section on the actress’ post was filled with red heart icons. “You look like a mermaid,” wrote a user. Check out Disha Patani’s latest post here:

If you are wondering why we called the aforementioned post a throwback picture, here’s the answer – in November, Disha shared a similar picture, in which she can be seen sporting the same blue bikini. Take a look:

We also love this picture from Disha Patani’s Maldives vacation.

Meanwhile, check out other posts from the actress’ vacation diaries:

In terms of work, Disha Patani started her career in acting with the 2015 Telugu film Loafer, in which she co-starred with Varun Tej. She made her debut in Bollywood with Neeraj Pandey’s 2016 sports biopic M.S. Dhoni: The Untold Story. She shared screen space with late actor Sushant Singh Rajput in the film. Disha went on feature in films like Baaghi 2, Bharat and Malang. She has also appeared in 2017’s Chinese film Kung Fu Yoga alongside Jackie Chan. Disha Patani will next be seen in Salman Khan’s Radhe: Your Most Wanted Bhai.

Taapsee Pannu Is Looking Back At Her Vacation Days Like This