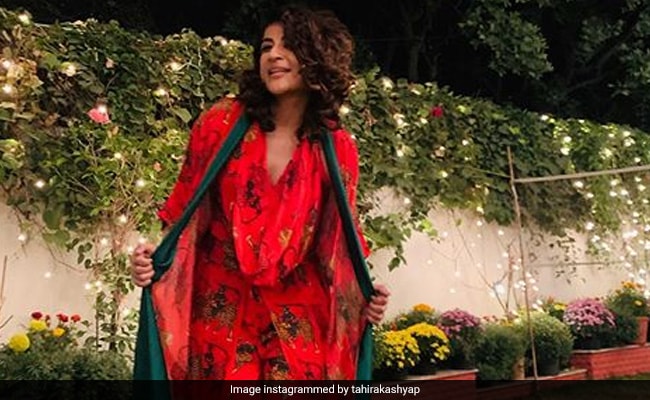 For Tahira Kashyap, Karwa Chauth celebrations took a virtual turn this year, given the fact that her husband and actor Ayushmann Khurrana was busy with the shooting of his forthcoming film Chandigarh Kare Aashiqui. Sharing a picture of herself, which was clicked by her 8-year-old son Virajveer Khurrana, Tahira wrote in her post: “Opening up my heart to the moon. Within the same city and yet a long distance one this year too. FaceTiming this day has become an every year ritual.” Tahira Kashyap is currently in her hometown Chandigarh. She added, “Clicked by the 8 year old who told me how to pose for this one.” In the comments section of the post, Ayushmann Khurrana wrote: “So pretty. Umm.”

On Wednesday morning, Tahira Kashyap shared a picture of herself with mehndi on her hand. “Karwa Chauth in times of corona! Honestly had set out to make snowflakes (paucity of time leads to this kind of self-art) until someone pointed out why would you make coronavirus! Now blame it on my skills or mind being clouded constantly by this stupid virus. Wishing you all a very happy corona free #karvachauth #gocoronago,” she wrote.

Tahira Kashyap, an author and filmmaker, married Ayushmann Khurrana in 2011 and the couple are parents to a son named Virajveer and daughter Varushka.

Poetess Sara Ali Khan’s Latest Pic Is All About Sunsets