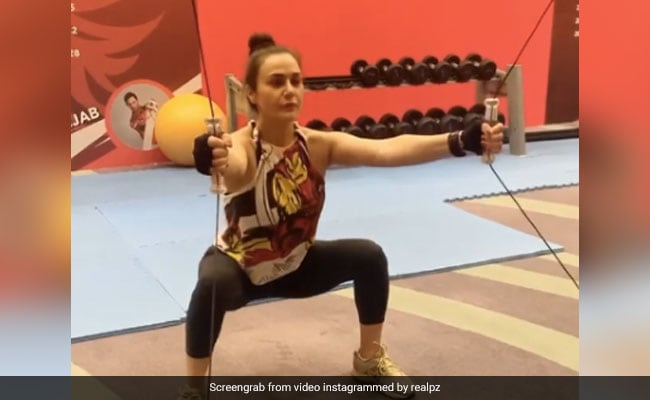 Preity Zinta in a still from the video. (courtesy realpz)

Preity Zinta found her source of “Tuesday motivation” by hitting the gym in Dubai, where she is staying for the current season of the Indian Premier League. The actress shared a video of herself doing squats. She wrote in the caption: “You won’t get a good butt by sitting on it – gotta squat it out so you can work your butt off. Here’s to strength, control, discipline and some Tuesday motivation. Grateful that Sofitel Dubai The Palm set up an awesome gym for us during our stay here and Adrian Leroux kept me inspired and motivated to work out.” Preity accompanied her post with the hashtags #pzfit, #dontgiveup, #gym, #workout and #ting.

Preity Zinta’s Instagram profile is a delight. On Halloween, she shared a still from the 2006 film Kabhi Alvida Naa Kehna and she wrote in her caption: “These face masks are good to scare the men in your life not the corona virus so please be careful in your choice of face masks this Halloween. #HappyHalloween #Ting.”

Preity Zinta is best known for her performances in films such as Dil Se, Lakshya, Salaam Namaste, Kal Ho Na Ho, Veer-Zaara and Dil Chahta Hai, among many others.

The actress got married to Gene Goodenough in 2016 and she moved to Los Angeles. However, she keeps visiting India. Preity Zinta was last seen in Bhaiaji Superhit, which released in 2018. She also featured in a small role in ABC series Fresh Off The Boat in one episode.

How Cute Is This Pic Of Actor Sumeet Vyas With Baby Son Ved?