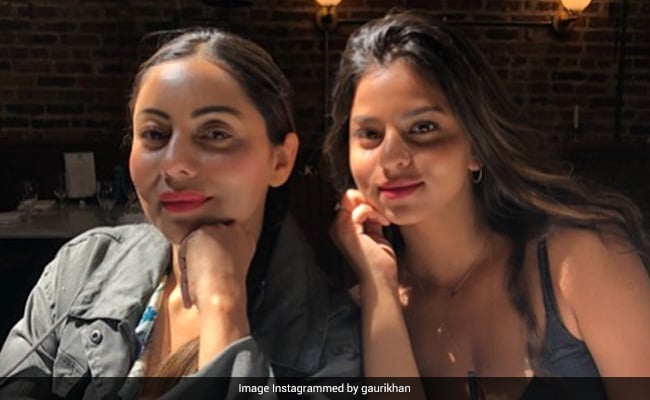 Suhana Khan may be yet to make her Bollywood debut but she is already the cynosure of all eyes on the Internet. As the daughter of superstar Shah Rukh Khan, Suhana enjoys a massive fan following on social media. And her fans were in for a treat on Monday, when mom Gauri Khan shared a picture of the 21-year-old on Instagram. Posting the stunning image in which Suhana Khan is dressed a floral shirt, Gauri Khan just tagged her daughter and dropped a heart emoji in the caption. The post also contained a second picture, giving us a  glimpse of the flowers she received on the occasion of Mother’s Day from Suhana. The bouquet came with the message, “Happy Mother’s Day, Maa. I love you, Suhana.”

On the occasion of Mother’s Day, Gauri Khan also shared two pictures with her mother and wrote, “Happy Mother’s Day …missing all the drama around the household chores.”

Meanwhile, Suhana Khan also often treats fans to beautiful pictures of herself. Several weeks ago, Suhana broke the Internet as she stepped out in a red Manisha Malhotra saree. While Suhana let the photo do all the talking, fans flooded the comments section with heart emojis.

On the work front, Suhana Khan will soon be making her debut with Netflix’s The Archies helmed by Zoya Akhtar. In addition to Suhana, the adaptation of the iconic comics will also serve as the debut film for Amitabh Bachchan’s grandson Agastya Nanda and the late Sridevi’s daughter Khushi Kapoor.

In March, Suhana, Khushi, and Agastya were snapped in their character costumes and the photos soon went viral on Instagram. Agastya Nanda, no prizes for guessing, will play Archie Andrews in the much-anticipated film. Suhana Khan, with her centre-parted black hair, appeared to be playing Veronica Lodge, while Khushi Kapoor, with her sweater vest and bangs, looked the part of Betty Cooper in the viral images. Read all about it here.

The Archies is being produced by Zoya Akhtar and Reema Kagti under their banner Tiger Baby Films.