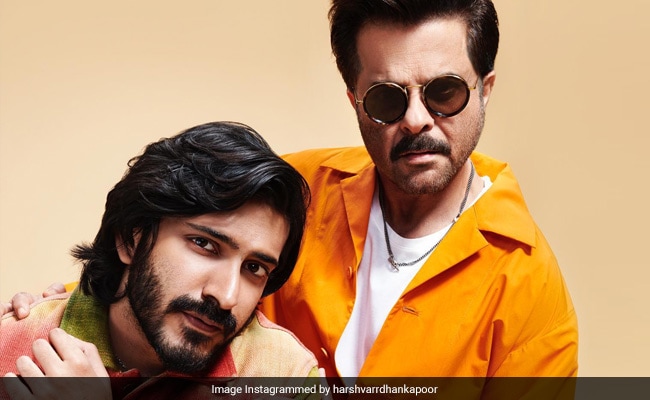 Harsh Varrdhan Kapoor, who is gearing up for the release of his upcoming film Thar with father, Anil Kapoor, recently revealed his father’s habit of eating his food during the shooting. Speaking with Zoom, Harsh said that Anil eats everyone’s food, and added that even if he has the same dish, he will put his hand in others’ food. However, the latter pulled his leg for not spending food on him. Harsh and Anil have worked together in the 2020 film AK vs AK, but Thar will be their first full-length film together.

“He eats everybody else’s food,” Harsh Varrdhan Kapoor told Zoom. However, when asked doesn’t their lunches come from the same place, to this, he replied, “Still, even if he has the same thing, same dish. He has to put his hand in your food. Anyway, I eat so less, look at my size. But still.”

In response to Harsh’s revelation, Anil Kapoor said, “What I noticed about him is that I am a very big-hearted person, I can share my food with anyone, but these people are like ‘Don’t touch this. Mera Khaana aap nahi khaa sakte (you can’t eat my food).’ Khaana hi kha raha hu yaar. Tereko itne saalo se paala hai, thoda khaana to de de mujhe (I am only eating food. I have raised you for so many years, at least give me some food).”

Anil Kapoor added that another thing he noticed about his son Harsh Varrdhan Kapoor is that he is not a hugger. He also revealed that his wife Sunita Kapoor was jealous while he was working with his son as he got more time to spend with his son than her. For the uninitiated, Harsh has moved out of his house and is living on his own.

“He’s not living with us now. He has moved out and is living on his own. I don’t know what the reason is, leaving all the comforts, and going and living alone. He is not one of those kids who come and hug you and do ‘papa papa.’ There’s nothing like that, we are more like friends. We talk when it’s very necessary, but I got more time to spend with him during the shoot of the film, and that’s what made my wife very jealous that I was spending more time with him,” Anil Kapoor added.

Talking about the film, Thar is helmed by Raj Singh Chaudhary and also stars Fatima Sana Shaikh and Satish Kaushik. The film will stream on Netflix on May 6, 2022.