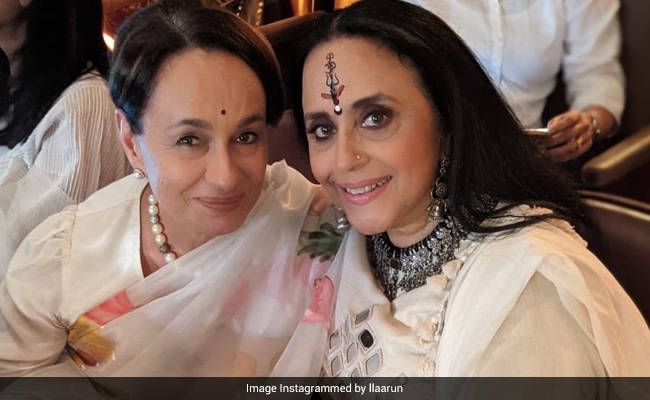 Alia Bhatt and Ranbir’s rumoured wedding has become the talk of the town. While everyone is waiting for an official confirmation from the couple, Alia’s mother, Soni Razdan’s friend Ila Arun has shared a post on her Instagram congratulating the to-be mother-in-law. In the post, Ila and Soni look beautiful in white outfits. Sharing the post, Ila wrote, “Hamari sony sasu ma ban raheein hai. (Our Soni is going to be a mother-in-law soon). Congratulations Mahesh and Dear sony. GodBless Aliya and Ranbeer.”

Soni Razdan and Ila Arun recently co-starred in the Netflix show Call My Agent. Well, this is not the first time they starred together. Earlier, they have worked together in films such as Sheeshay Ka Ghar, Mandi, Trikal and others.

Alia Bhatt’s uncle Robin Bhatt told India Today that the rumoured wedding would be a 4-day-long affair. He added that the wedding ceremonies would start on April 13 with Alia’s mehndi ceremony, followed by a sangeet ceremony on the next day.

Alia Bhatt and Ranbir Kapoor will reportedly get married at the former’s Vastu house. And not long ago, we shared the pictures of the house decked up with lights. The couple’s pre-wedding ceremonies will reportedly be held at RK Studios, where Rishi Kapoor and Neetu Kapoor’s reception happened.

On the work front, Ranbir Kapoor and Alia Bhatt will be seen in Ayan Mukerji’s Brahmastra. It will mark their first film as an onscreen couple.