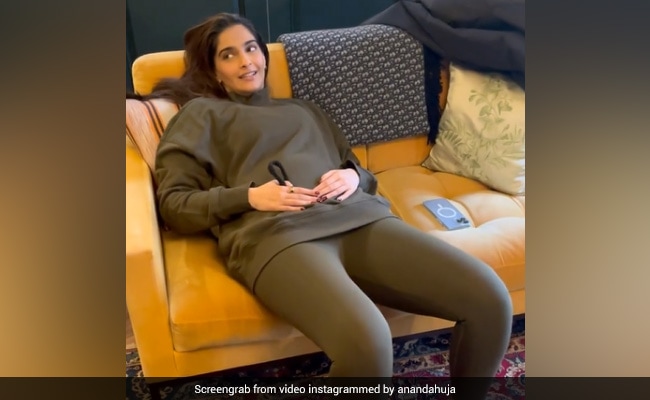 Sonam Kapoor in a still from the video. (courtesy: anandahuja)

Sonam Kapoor and Anand Ahuja celebrated their 4th wedding anniversary on Sunday by sharing mushy posts on social media. Anand Ahuja shared a video from the early days of Sonam’s pregnancy, in which she can be seen chilling on the couch. He captioned it: “Girlfriend 6 years, wife 4 years and as you can tell in this video, her early days of mom-to-be this year! Happy anniversary my everyday phenomenal.” He also posted a few pictures with Sonam in a separate post and wrote: “The most giving, selfless, generous person in the world. Only kindness and wholeness in your soul. You inspire me everyday. Happy anniversary my every day phenomenal.”

In her post, Sonam Kapoor wrote: “Happy, happy anniversary Anand Ahuja I’ve always been an incurable romantic and believed in all the love stories ever written. You’ve surpassed all expectations of what I dreamt and wished for. I thank the universe everyday that gave me the best man in the world! Love you the most most my baby. 6 years down and an eternity to go.”

Sonam Kapoor and Anand Ahuja announced pregnancy in March. Their caption read: “Four hands. To raise you the very best we can. Two hearts. That will beat in unison with yours, every step of the way. One family. Who will shower you with love and support. We can’t wait to welcome you.” They added the hashtags #everydayphenomenal and #comingthisfall2022.

Sonam Kapoor married Anand Ahuja in May 2018 in Mumbai after dating for several years. Anand Ahuja runs the fashion label Bhane and the sneaker boutique VegNonVeg. The couple manage their time between Mumbai and London.

Sonam Kapoor was last seen in the 2019 film The Zoya Factor, co-starring Dulquer Salmaan and Angad Bedi. Sonam also stared in Ek Ladki Ko Dekha Toh Aisa Laga, alongside Anil Kapoor, Rajkummar Rao and Juhi Chawla. The actress will next be seen in the Shome Makhija’s film Blind. She also had a cameo in Netflix’s thriller AK vs AK, starring Anil Kapoor and Anurag Kashyap.