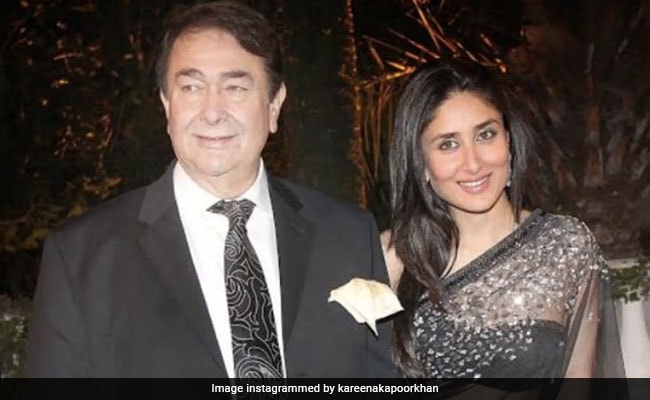 New Delhi: It’s Father’s Day and celebs are dropping adorable posts on their Instagram handles to wish their fathers. Kareena Kapoor has also shared a throwback picture with her father, Randhir Kapoor, on her Instagram handle. In the image, the father-daughter duo looks amazing in all-black outfits – Randhir Kapoor looks dapper in a black pantsuit, while Kareena looks beautiful in a black-sheer saree. Sharing the post, she dropped a simple caption, “Papa,” followed by a heart emoticon. Soon after she shared the post, her sister-in-law Saba Pataudi dropped two heart emoticons in the comment section.

A few days ago, the Kapoor sisters – Kareena and Karisma visited their father Randhir Kapoor’s house for lunch and enjoyed some delicious delicacies. Karisma Kapoor shared several pictures from their lunch party on her Instagram stories.

Meanwhile, Kareena Kapoor has been busy shooting for her upcoming OTT debut, The Devotion of Suspect X, helmed by Sujoy Ghosh. On Saturday, she shared several pictures from the sets featuring her co-stars Vijay Varma, Jaideep Ahlawat, the crew and her son Taimur Ali Khan. Sharing the post, Kareena wrote, “DSX! The best crew, best ride, best times… and I’m pretty sure the best film too. Get ready this one is (fire emoticon)”.

Earlier, Kareena Kapoor shared a picture with her son Taimur Ali Khan and captioned it as “Last day visitor on set…got his vibe on…ready for the summer holidays…No pictures Amma…ufff just like his father#DSX Last Day #Ready for Summer 2022 Bro#My TimTim….”

On the work front, Kareena Kapoor is awaiting the release of Laal Singh Chaddha, co-starring Aamir Khan. The film is slated to release on August 11, 2022.