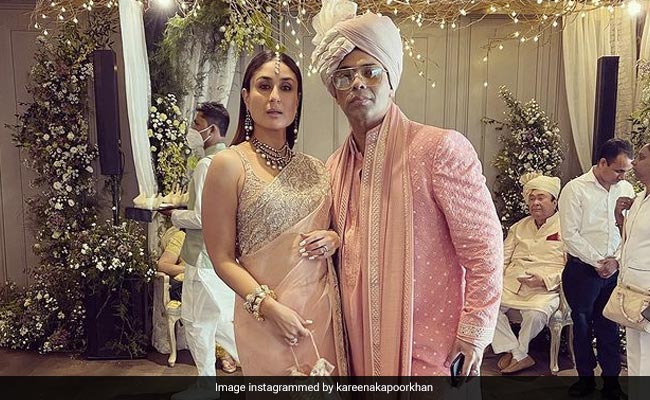 Kareena Kapoor, you kill us. The actress posted a picture of herself and filmmaker Karan Johar at Ranbir Kapoor and Alia Bhatt‘s wedding with this blockbuster caption: “Kaun hai yeh joisne doobara mudke humein nahin dekha?” Movie buffs will get the reference; for those who didn’t, here’s the backstory. The line is one that Kareena’s character Poo says in Kabhie Khushi Kabhie Gham, directed by Karan Johar. In the film, Hrithik Roshan’s character gives Poo, Queen Bee of her college campus, the cold shoulder, leaving her to deliver this dialogue.

The picture of Kareena Kapoor and Karan Johar, twinning in pink and looking searching into the distance, matches the K3G perfectly. We’d like to apply another iconic Poo dialogue to the photo, if we may: “Good looks, good looks and good looks.”

The hilariously precious Poo, short for Pooja, livens up the otherwise dramatic events of K3G by being utterly superficial and dropping one-liner after one-liner. For instance, she refers to herself as “P.H.A.T” helpfully expanding to “Pretty hot and tempting.”

Kareena Kapoor brought the “P.H.A.T” factor to the big Bollywood wedding on Thursday. Her cousin Ranbir Kapoor married actress Alia Bhatt in a private ceremony at home, attended by close friends and family. Among them were Kareena’s sister Karisma and father Randhir Kapoor.

She shared this picture of Ranbir and Randhir Kapoor from the wedding.

Designer Manish Malhotra, who created the saree Kareena wore to the wedding, posted this photo of the actress with Karisma Kapoor and Karan Johar. The three are old friends.

Kareena Kapoor will next be seen in Laal Singh Chaddha with Aamir Khan.