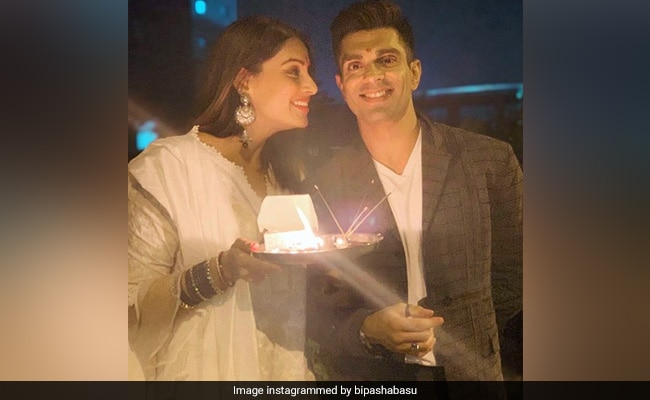 On the occasion of Karwa Chauth, Bipasha Basu shared a memory from last year’s festivities. She revealed in her post that she and her husband Karan Singh Grover fast to “celebrate togetherness.” She also posted a video from the festivities and she wrote: “Happy Karwa Chauth. Last year’s Karwa Chauth memories. We literally chased the moon and broke our fast on the street as we had a family dinner planned post the ritual. Things I make Karan Singh Grover do and he always encourages my enthusiasm in everything. We both fast together each year … another day to celebrate togetherness and our love. #monkeylove.”

Bipasha Basu met Karan Singh Grover  during the shooting of the 2015 film Alone. The couple got married on April 2016 as per Bengali traditions. They later hosted a reception for their industry friends, which was attended by several Bollywood stars. The couple recently co-starred in the web-series Dangerous. See some of their pictures together here:

Bipasha Basu was a presenter on the TV show Darr Sabko Lagta Hai. The actress is best-known for her roles in films such as Dhoom 2, Dum Maaro Dum, Race, Omkara, Bachna Ae Haseeno and Raaz, among others.

Karan Singh Grover has been a part of many TV shows including Dill Mill Gayye, Qubool Hai, Kitni Mast Hai Zindagi and Dil Dosti Dance, to name a few. He starred as Mr Bajaj on Ekta Kapoor’s TV show Kasautii Zindagii Kay 2 for some time. After he quit the show, Karan Patel stepped into his shoes.