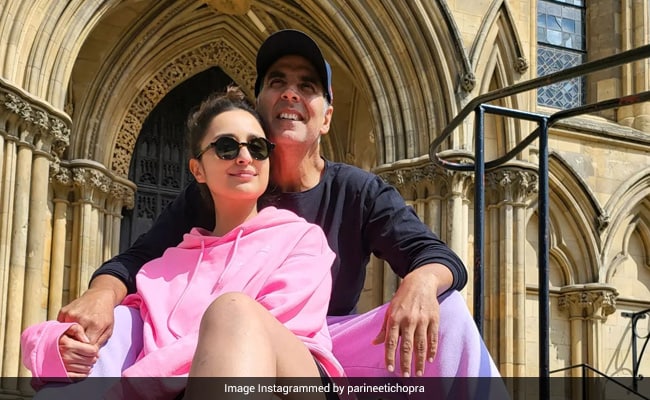 For all Parineeti Chopra fans out there, we have some good news in store for you. The actress has announced her next project alongside her Kesari co-star Akshay Kumar on Instagram. The two are currently shooting in York, United Kingdom. Parineeti shared a candid picture with Akshay Kumar and wrote, “We are back. This time, the Kesari duo may be shooting in York, but the laughs, jokes, games and Punjabi gupshup is the same.” Fans have expressed their excitement by leaving red hearts and fire emojis under the post.

The upcoming film, which went on floors on July 4, is directed by Tinu Desai. Pictures of Akshay Kumar‘s character from the sets have also surfaced online. The yet-untitled project is produced by Pooja Entertainment. The film is expected to hit the theatres next year.

Akshay Kumar, a few days back, shared an update about his work schedule on Instagram. Wait, it isn’t the usual posts. He wrote, “When the rains set in, shooting is cancelled, so family here I come” and added the hashtag “York To London”. In the picture, Akshay Kumar is standing on the platform waiting for his ride.

Akshay Kumar is also awaiting the release of his film Raksha Bandhan. The movie stars Bhumi Pednekar in lead. The comedy-drama, directed by Aanand L Rai will hit the theatres on August 11. Akshay Kumar and Aanand L Rai have last worked in Atrangi Re, which also featured Dhanush and Sara Ali Khan. Akshay Kumar also has Ram Setu in the kitty.

Meanwhile, Parineeti Chopra also has Uunchai in her pipeline. Amitabh Bachchan, Anupam Kher, Neena Gupta, Boman Irani and Danny Denzongpa are part of the Sooraj Barjatya directorial. The film will release on November 11.