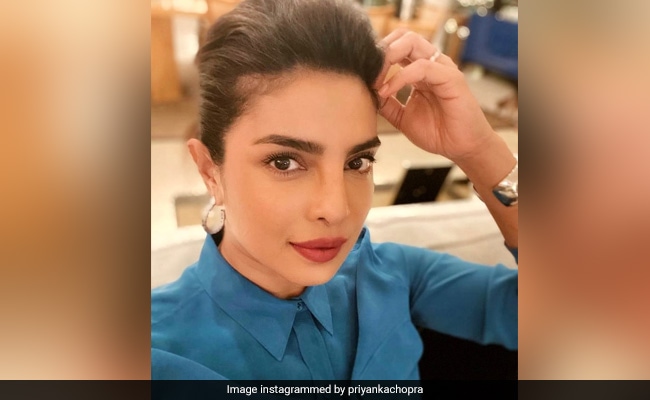 Priyanka Chopra is now also an “updo expert” and the actress’ latest post is a proof. Priyanka, who is quite busy with the promotional duties of her upcoming film The White Tiger and her memoir title Unfinished, shared a scene from her “virtual press junket life” and we must say, her hair-styling game is on point in the picture. In her caption, the actress wrote that she has now become an “expert” at styling her hair in an updo. “I must say, I’ve become quite the updo expert #VirtualPressJunketLife,” she wrote in the caption. In the picture, Priyanka Chopra can be seen wearing a teal blue top and hoop earrings.

After completing the shooting schedule of her new film Text For You in London, Priyanka Chopra started promoting The White Tiger and Unfinished. She has been sharing her looks for her virtual press junket. “DIY glam. How’d I do?” she captioned one of her posts.

In terms of work, Priyanka Chopra will soon release her memoir Unfinished. Priyanka Chopra was last seen in Netflix’s superhero film We Can Be Heroes. Her last Hindi film was The Sky Is Pink, co-starring Farhan Akhtar, Zaira Wasim and Rohit Saraf. Priyanka Chopra has a film with actress-comedian Mindy Kaling lined-up. She will also be seen in Amazon’s series titled Citadel. The actress has also joined the voice cast of HBO Max’s upcoming series A World Of Calm.