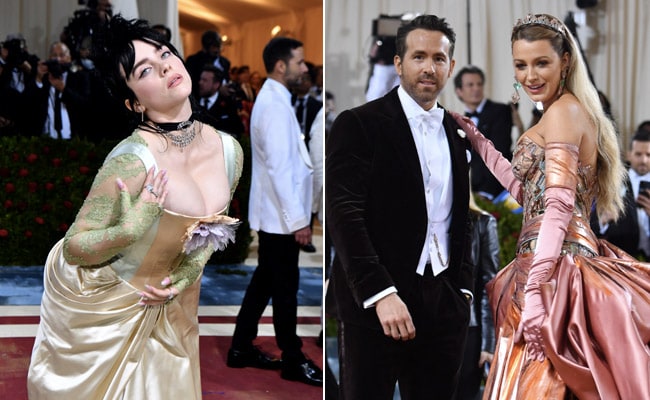 A-listers dressed to the theme of “gilded glamour” sparkled on the red carpet as the annual Met Gala extravaganza known as “the party of the year” returned to its pre-pandemic schedule Monday in New York. Co-host Blake Lively was one of the first stars to wow in a beaded Versace gown with an oversized satin bow that unfurled to reveal a light blue train. The actress, whose husband the actor Ryan Reynolds wore a brown velvet tuxedo, described the dress as an “homage” to New York City architecture, including the Statue of Liberty and the Empire State Building.

Among other early arrivals was Vogue editor-in-chief Anna Wintour, who oversees the philanthropic party that raises millions of dollars for the Metropolitan Museum of Art’s Costume Institute.

The high-priestess of fashion matched a Chanel dress with a tiara as the fundraiser returned to its usual early May slot after the coronavirus pandemic forced the cancelation of the 2020 event and delayed last year’s edition to the autumn.

Some 400 famous names from the worlds of music, film, fashion, sports and more were set to strut their stuff at the over-the-top costume parade on the Metropolitan Museum of Art’s carpeted steps.

And actor Riz Ahmed took a different approach to the theme, wearing a black open shirt with a white undershirt underneath and leather boots.

“This is an homage to the immigrant workers who kept the Gilded Age golden,” he said.

The invite-only guest list is a closely guarded secret, with other early arrivals including singers Jon Batiste and Shawn Mendes, tennis star Venus Williams and The Crown actress Emma Corrin.

Pop sensation Rihanna is a regular but is due to give birth soon so was unlikely to give fans a glimpse of her baby bump. Some of the more eye-catching outfits worn over the years have included Beyonce’s “naked dress” and Kim Kardashian’s face-covering black bodysuit.

In 2019, the last edition before the pandemic, Lady Gaga did a striptease of four different outfits, starting in a billowing fuchsia dress and ending in black lingerie.

End gun violence’ -Also grabbing headlines that year was singer and actor Billy Porter who dressed as a sun god. With outstretched golden wings, he was carried in by six shirtless men.

At last year’s event, held in September, left-wing politician Alexandria Ocasio-Cortez caused a stir by wearing a dress emblazoned with the slogan “Tax the Rich.”

This time, New York City Mayor Eric Adams struck a political chord with a jacket on the back of which were the words “end gun violence.”

The dress code comes from the annual exhibit that the party coincides with. This year’s is “In America: An Anthology of Fashion,” a retrospective from the late 19th century to the present.

This year’s honorary presidents are Instagram boss Adam Mosseri and designer Tom Ford, who is expected to dress many of the attendees.

The gala was first held in 1948 and was for a long time reserved for New York’s high society. Wintour took over the running in 1995, transforming the party into a catwalk for the rich and famous.