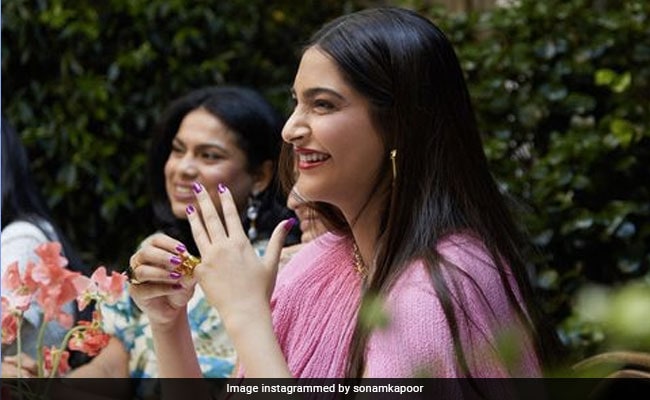 Sonam Kapoor’s baby shower pictures keep getting better and better. The actress, who had her baby shower in London earlier this week, shared inside pictures from the festivities on her Instagram profile on Saturday. One of the pictures features Sonam with her husband Anand Ahuja. In another shot, the mom-to-be can be seen with an ear-to-ear grin on her face. Sonam Kapoor captioned her post: “It’s all starting to feel real! This baby is now well on its way and I’m so thankful to Eiesha Bharti Pasricha for throwing the best welcoming party ever, bringing together so many of my favourite people and showering me with love and blessings in the most generous and beautiful way.”

Sonam Kapoor and Anand Ahuja, after dating for a couple of years, got married in May 2018 in Mumbai. They had a star-studded wedding and reception. Anand Ahuja runs the fashion label Bhane and the sneaker boutique VegNonVeg.

In terms of work, Sonam Kapoor had a cameo in Netflix’s thriller AK vs AK, starring her dad Anil Kapoor and filmmaker Anurag Kashyap. She was last seen in the 2019 film The Zoya Factor, co-starring Dulquer Salmaan and Angad Bedi. The actress will next be seen in the Shome Makhija’s film Blind.