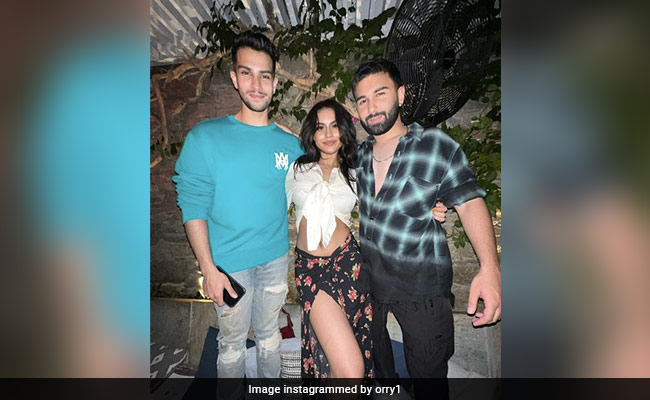 We’re roaming across Europe vicariously through Ajay Devgn and Kajol’s daughter Nysa Devgn. Her travel pictures have been doing the rounds of the Internet. After Amsterdam and Spain, Nysa’s next stop is Greece. Thanks to Nysa’s friend Orhan Awatramani, her latest pictures give her fans a glimpse of the fun time she is having with a taste of her travel wardrobe. Orhan’s latest set of images feature Nysa in a front-knotted shirt with a thigh-high slit skirt. His caption read: “Kiss me hard before you go.”

Earlier, Orhan posted a boomerang video of Nysa from Mykonos, sitting at a cafe and posing for the camera In the clip, she wears a blue dress. His caption read: “& I only could, I’d make a deal w/ god & get him to swap our places.”

Before Greece, Nysa was in Spain and her friend Vedant Mahajan shared lovely pictures with the 19-year-old. She is seen wearing a green co-ord set while having a scrumptious meal with her friends. In other pictures, Nysa opts for a peplum white top with a nude short skirt.

While in Amsterdam, Nysa spent time with Janhvi Kapoor, who was in the city to shoot for Bawaal with Varun Dhawan. Orhan posted candid shots from the place and wrote: “When you feel so tired but you can’t sleep.” The post also features a picture of Nysa with Janhvi, Varun Dhawan, Natasha Dalal and other their friends.

Nysa Devgn, 19, is Ajay Devgn and Kajol’s elder daughter. She is studying International Hospitality at Glion Institute of Higher Education in Switzerland. The couple also has a son, Yug./p>