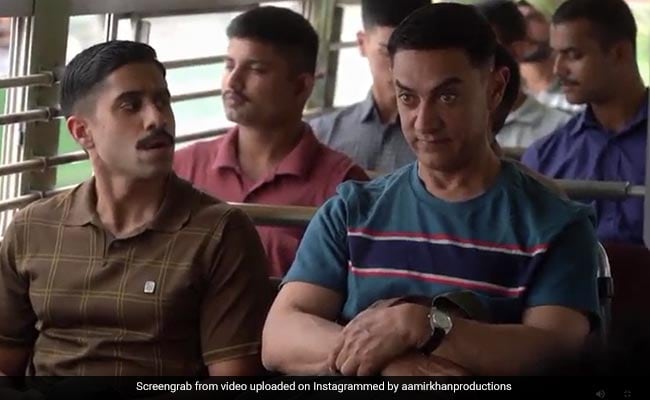 Naga Chaitanya and Aamir in a still from the video. (courtesy: aamirkhanproductions)

The makers of Laal Singh Chaddha shared a behind-the-scene video from the film, which chronicles Naga Chaitanya’s journey, how he prepped for his character Balaraju and his experience of working on the film. Naga Chaitanya signed off the video saying, “I was sad when the film was over” and that he “did not want to move on” from the project. In the video, Naga Chaitanya revealed that his character’s look was inspired by his grandfather. “Somehow it has a connection with grandfather so it is very magical,” Naga Chaitanya said. The actor added that he used a mouthpiece and moustache to make his look more authentic.”

In another segment of the video, Laal Singh Chaddha star and producer Aamir Khan said this about working with Naga Chaitanya: “I am really grateful to Chay for doing this film. As a producer, mujhe comfort mila uske sath kaam karke (it gave me a sense of comfort to work with him). He is a team player. As a an actor, he is so on the ball. He does it with full focus and completely immerses himself in the film.” Aamir also added that he called Naga Chaitanya’s parents and told them that they should be “proud” of their son.

The caption on the video posted by Aamir Khan Productions read: “A best friend that everyone would love to have! Meet Balaraju from Bodipalem, a loving and innocent friend of Laal… Take a look at Chaitanya Akkineni’s adorable and heartfelt journey as Bala. Laal Singh Chaddha releasing in theatres worldwide on 11th August.”

Last week, a poster of Naga Chaitanya from the film was shared on social media. The caption on the post read: “Introducing Balaraju from Bodipalem… played by Chaitanya Akkineni! Love you our Yuva Samrat.”

Forrest Gump showcased the story of a man (Tom Hanks), who does extraordinary things in his life. However, his only purpose is to be with his childhood love Jenny. Laal Singh Chaddha will clash with Aanand L Rai’s Raksha Bandhan at the box office. Both the films are slated to release on August 11.