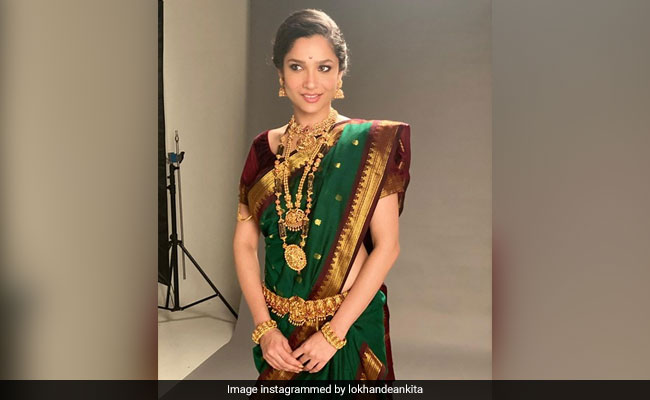 TV star Ankitra Lokhande began Navratri festivities with a special photo shoot on Saturday. The actress shared a series of pictures and videos from her festive look, in which she can be seen dressed in a traditional Maharashtrian outfit. Ankita can be seen smiling with all her heart as she poses for the camera. The Pavitra Rishta actress looks stunning as ever in a green saree, draped in a traditional Maharashtrian style. She accentuated her look with gold jewellery and her hair can be seen immaculately tied in a bun. Sharing pictures from the shoot on Instagram, Ankita wrote, “Love for Marathi jewelries, Marathi food and Marathi brides too.” She accompanied her post with the hashtags #jaimaharashtra, #memarathi, #navratri, #jaimatadi, #shooting and #photoshoot.

Ankita Lokhande’s Instafam loved her OOTD. The comments section of her post was filled up with remarks like “So beautiful” and “you look so lovely Ankita.” Another Instagram user added, “love the look.” Another comment read, “This saree looks great on you.”

Ankita Lokhande, a popular name in the Hindi TV industry, is best-known for playing the role of Archana in the popular television show Pavitra Rishta, in which she co-starred with late actor Sushant Singh Rajput. They dated for six years and they parted ways in 2016. Besides Pavitra Rishta, Ankita has featured in shows such as Ek Thhi Naayka and Shakti – Astitva Ke Ehsaas Ki.

In 2019, Ankita Lokhande made her Bollywood debut with Kangana Ranaut’s period-drama Manikarnika: The Queen Of Jhansi. She also starred in Baaghi 3, which featured Tiger Shroff in the titular role. Ankita Lokhande was also a participant in TV reality shows like Jhalak Dikhhla Jaa and Comedy Circus.

“The BATMAN” Trailer released: Fans are excited for the Movie- ShaamTak.com

Trailer of the most awai
Read More

‘Bigg Boss 14′: Housemates Break Down When Told Of Seniors’ Exit