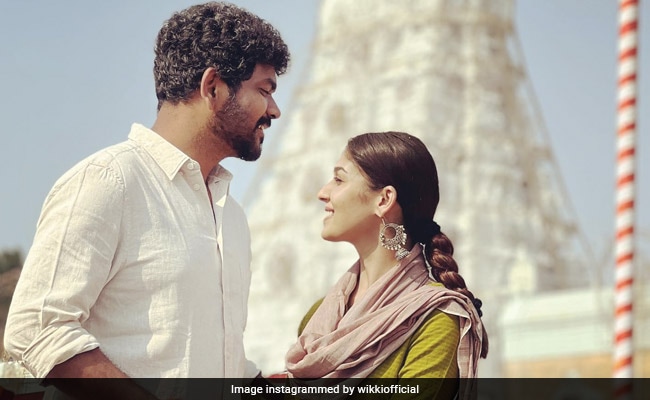 Vignesh Shivan has dropped another adorable post with Nayanthara, and we still can’t get enough of them. On Saturday, Vignesh shared a cute picture of himself with his lady love Nayanthara posing in front of Tirupati temple. In the post, he thanked the Lord for the success of his recent release film Kaathuvaakula Rendu Kaadhal and asked for his blessings. Sharing the picture, he wrote, “#ThanksGiving at #Thirupathi ! We prayed & asked for a #BlockBuster ! You gave it dear #venkateshwaraswamy #Thirumala #Thirupathi #Elumazhaiyaan ! Here we are thanking you for all the blessings, love & support! All that we want is your love & backing dear Thirumalayaneyyyyy !!! #Prayers & hard work #KaathuvaakulaRenduKaadhal #Blockbuster #people #favourite”

A day ago, Vignesh Shivan shared a stunning post with his girlfriend, Nayanthara. The picture is from Shiridi, where they went to seek the blessing of Sai Baba and thank him for the success of his recent release film. Sharing the  picture,  he wrote, “From Shiridi wit my Kanmani gratitude trip to meet Sai Baba for all the lovely moments #KaathuVaakulaRenduKaadhal #blessed #Blockbuster #ThanksGiving”

Kaathuvaakula Rendu Kaadhal is a romantic-comedy-drama, which also stars Vijay Sethupathi and Samantha Ruth Prabhu. The film received mixed reviews from the audience and critics – they praised their performance and trio’s chemistry but were criticised for its lengthy runtime and outdated plot.

Meanwhile, on the work front, Nayanthara has several films in her kitty – Atlee’s untitled with Shah Rukh Khan, Godfather and Connect. Vignesh Shivan, on the other hand, has AK62.