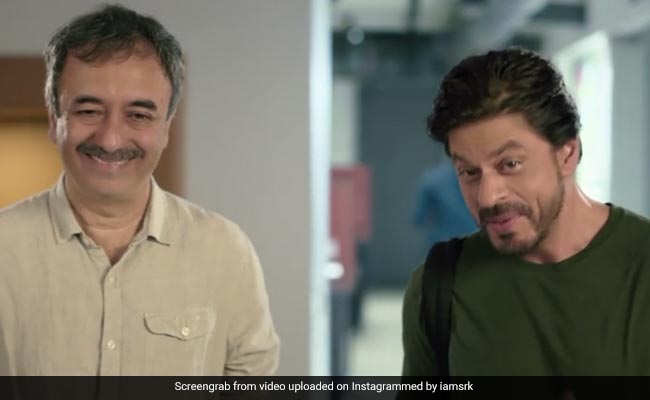 Rajkumar Hirani and SRK in a still from the video. (courtesy iamsrk)

Two cinematic geniuses are all set to collaborate for a project for the first time and it can’t get any better than this. Shah Rukh Khan just announced his next project on social media on Thursday and it is with celebrated filmmaker Rajkumar Hirani. The film will also star Taapsee Pannu and it will be produced by SRK and Gauri Khan’s production house Red Chillies Entertainment. The film, titled Dunki, will release on December 22, 2023. Sharing the announcement video, Shah Rukh Khan wrote in his post: “Dear Rajkumar Hirani Sir, Aap toh Mere Santa Claus nikle. Aap shuru karo main time pe pahunch jaunga. Actually main toh set par hi rehne lagunga. Feeling humbled and excited to finally work with you. Bringing to you all Dunki in cinemas on 22nd December 2023.

The video begins with SRK checking out the posters of some of Rajkumar Hirani’s iconic films – PK, Sanju, Munnabhai MBBS, 3 Idiots. SRK then asks Rajkumar Hirani if he has any script for him. Without spilling much beans, the filmmaker tells him that he and SRK will work in a film called Dunki, which the filmmaker promised, will be an amalgamation of comedy, emotions, romance (sans SRK’s iconic arms expanding pose). We can’t keep calm.

Shah Rukh Khan, who has been fairly active as a producer in the last few years, was last seen in 2018 film Zero, co-starring Anushka Sharma and Katrina Kaif. He has also co-produced Alia Bhatt’s Darlings, which marks her debut as a film producer. He also backed the standalone film on Bob Biswas, featuring Abhishek Bachchan in the titular role, which released last year.

Other than that, Shah Rukh Khan also backed the film Love Hostel, which starred Bobby Deol, Sanya Malhotra and Vikrant Massey in the lead roles. He wrapped the Spain schedule of Pathaan last month. The film also stars Deepika Padukone and John Abraham.