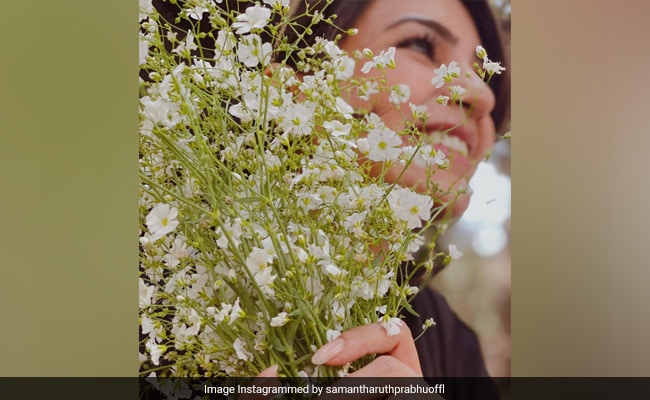 Samantha Ruth Prabhu has treated her Insta family to her gorgeous picture, and we can’t take our eyes off. The actress keeps her fans updated by posting her pictures on Instagram. Recently, the actress celebrated her 35th birthday on April 28, and now after three days, she has shared her first picture post-birthday. In the image, the actress is holding a bunch of white flowers, flashing her million-dollar smile. Sharing the first post after turning 35, she wrote, “Older and Wiser”. Soon after she shared the post, her industry friends and fans flooded the comment section.

A fan wrote, “Your smile is so precious,” while others dropped heart and fire emoticons. Check out the picture below:

Samantha Ruth Prabhu is one of the most loved celebs in the Indian film industry. On the occasion of her birthday, her co-star Vijay Deverakonda pulled a hilarious prank on her while they were shooting in Kashmir for their upcoming film VD11. With the help of his team, he planned a fake emotional scene and right when Samantha shed tears, Vijay called it a surprise. Sharing the video on her Instagram handle, the actress thanked the whole crew, including Vijay, for an “elaborated surprise”. She wrote, “The sweetest surprise. It was freezing and we had a lot of work to do. But that didn’t stop these scamsters from pulling off this elaborate surprise.”
Here have a look:

Meanwhile, on the work front, Samantha was recently seen in the film Kaathu Vaakula Rendu Kadhal, co-starring Nayanthara and Vijay Sethupathi. Next, she will be seen in Shaakuntalam, Yashoda and VD 11.