Amitabh Bachchan’s granddaughter Navya Naveli Nanda is celebrating her 25th birthday today (December 6) and on this occasion, she received a special wish from BFF Shanaya Kapoor. She shared a collage of pictures on her Instagram stories in which they can be seen laughing their hearts out. Shanaya looks pretty in a white crop top and blue jeans, while Navya looks pretty in a grey top paired with black pants. Along with an adorable picture, Shanaya dropped a sweet birthday note that read revealing her nickname “Navlooo”. She wrote, “Happy Birthday my Navloo. I love you!” followed by heart emoticons. 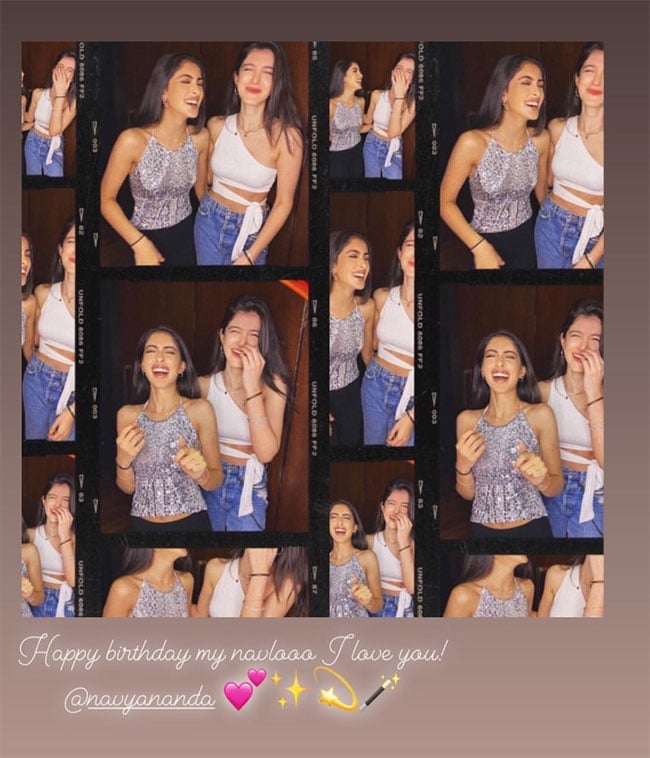 Shanaya Kapoor and Navya Naveli Nanda shared a close bond and are often spotted hanging out together. Speaking of which, Shanaya, who celebrated her 23rd birthday on November 1 shared pictures from festivities on Instagram. In the many photos, we can see Navya sitting beside Shanaya.

Shanaya Kapoor is set to make her Bollywood debut with Karan Johar’s Bedhadak. Helmed by Shashank Khaitan, the movie also stars Gurfateh Pirzada and Lakshay Lalwani. The film will go on the floors early next year.

Coming back to the birthday girl Navya Naveli Nanda, she is the granddaughter of Amitabh Bachchan and Jaya Bachchan. She is the daughter of Shweta Bachchan and Nikhil Nanda. She also has a brother Agastya Nanda, who will make his Bollywood debut with The Archies.