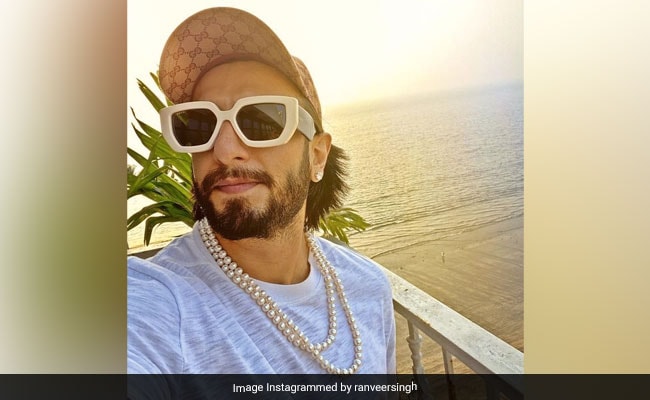 Ranveer Singh is known for his OTT sartorial choices and his recent post on Instagram just proves it very well. The actor, on Friday, posted a picture of himself and his post has been trending for all good reasons since then. Ranveer’s latest selfie grabbed the attention of his fans because, in the picture, he can be seen sporting a white t-shirt, which he paired with a diamond stud earring, pearl necklace and white-rimmed sunglasses. He can also be seen sporting a cap in the selfie that he clicked in his hotel balcony with a nice beach view. However, there’s one more reason Ranveer’s picture is trending on social media – Arjun Kapoor’s comment on his post.

And here’s what Arjun Kapoor commented:

Ranveer Singh and Arjun Kapoor share a great rapport. The duo often leave hilarious comments on each other’s Instagram posts. Arjun, in an old interview, called himself Ranveer’s wife and actress Deepika Padukone’s “souten.” He was asked about his rapport with Ranveer in an interview with mid-day when he said: “I tell Deepika that I am her souten. We have been consistently warm.”

In terms of work, Ranveer Singh will next be seen in Kabir Khan’s ’83, which showcases the story of India’s iconic win at the 1983 Cricket World Cup. Ranveer Singh plays the role of Kapil Dev in the film. The actor also has Takht, Cirkus and Jayeshbhai Jordaar lined-up.

“Chulbuli” Priyanka And “Albela” Rajkummar – What’s Not To Love?

Netflix Has Renewed The Umbrella Academy for Season 3

The Umbrella Academy will
Read More