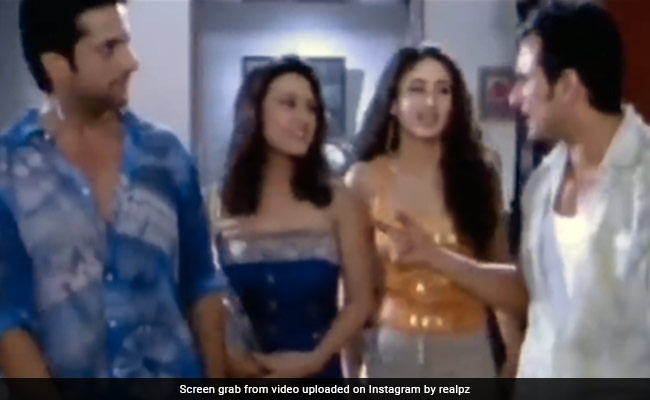 And the award for the best throwback post goes to Preity Zinta. On a fine Saturday morning, the actress decided to walk down memory lane and treated us to an amazing video. It is an ad commercial for a beverage brand. Apart from Preity Zinta, Kareena Kapoor, Saif Ali Khan and Fardeen Khan are also seen in the video. The clip is super fun, to say the least. For the caption box, the actress simply wrote, “Major Throwback to some fun times and masti.” Fans have flooded the comment section with ROFL emojis.

Here is the video we are talking about:

Preity Zinta loves to share blast-from-the-past moments with her Instagram family. No, we aren’t complaining about it at all. When her film Jhoom Barabar Jhoom completed another year, Preity Zinta marked the day with a  special note and clip from the film. She has dropped snippets of the song Kiss Of Love and wrote, “Jhoom Barabar Jhoom turns a year older today and I cannot stop smiling and thinking of all the mad scenes we shot and how much we laughed. Everyone was exhausted after all the dance sequences but that did not stop us from having a blast. This movie is a constant reminder of how friends make every situation adventurous and fun.”

Abhishek Bachchan, who was Preity Zinta’s co-star in the film, left a red heart under the post.

Preity Zinta also came up with a long note when her film Armaan completed 19 years. She spoke about her character, Sonia, in the film and how she explored new things. “Uf. Armaan – this film was special in so many ways. I got to experience a complex Sonia – a psychotic spoilt brat with a wounded heart. She was a paranoid narcissist & a lost child. So much to explore and so much to express. I will always be grateful to Honey aunty for being such a brave and experimental director. A big shout out to the cast & crew of this crazy movie for making it possible and to Anil Kapoor and Gracy Singh for letting me torment them in every possible way.”

Preity Zinta is known for her works in films like Veer Zaara, Kal Ho Naa Ho, and Koi Mil Gaya among others.