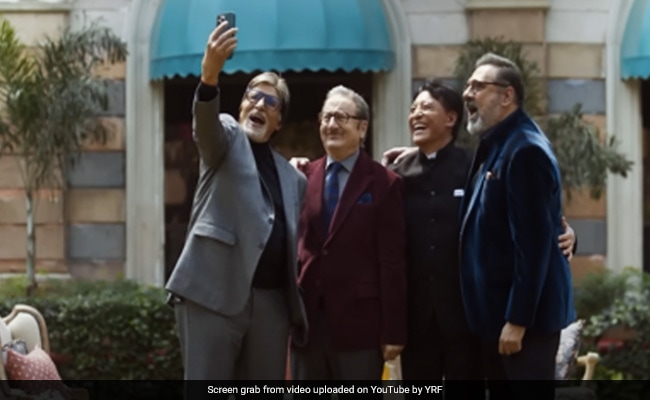 The heights that it aims for are way beyond the reach of Uunchai. If anything, director Sooraj Barjatya’s first film in seven years – and second in 16 years – is a rather steep climb.

More a long-winded motivational speech that peddles idea that are as old as the hills than a bright, engaging film that will have you asking for more, it centres on a long road trip and a six-day high-altitude trek, both as arduous as you would expect them to be.

Top-lined by Amitabh Bachchan playing a bestselling author of character development books for young people, the film abounds in emotional crescendos, but the drive from Delhi to Kathmandu and the hike from Lukla to the Everest base camp do not yield much adventure until the film reaches its last legs and is about to collapse under the unwavering solemnity of its purpose.

Fun-loving Bhupen (Danny Denzongpa), a man who left Nepal as a youth and spent his entire working life as an Indian government officer in Delhi, dies of a cardiac arrest on the night of his birthday. At the bash earlier in the evening, he announces his plans to return to Nepal for a Himalayan trek with his three men he has been friends with for five decades.

The friends – writer Amit Shrivastav (Bachchan), bookseller Om Sharma (Anupam Kher) and garments shop owner Javed Siddiqui (Boman Irani) – decide, after weighing all the pros and cons given their advancing years, to go ahead and honour their deceased mate by undertaking the difficult journey up the mountain that they know will be an endurance test for their creaking bones and worn-out lungs. It isn’t just another outing for the trio – they carry an urn containing Bhupen’s ashes.

Amit, Om and Javed are septuagenarians with health and other issues, but they join a group of youthful trekkers under the guidance of adventure tour operator Shraddha Gupta (Parineeti Chopra). When things get really tough and they close to wilting, they remember Bhupen’s repeated assertion that the Everest has all the answers and the trek to its base is worth the pain.

Uunchai, which marks a comeback for the Rajshri Productions banner, founded in 1947 by the late Tarachand Barjatya, tries very hard to keep up with the times, but fails to shake off the lure of methods that reek of obsolescence. If not outright maudlin, the film looks for the most simplistic of ways to deal with complex psychological and behavioural questions. The era of simple relationship dramas is long gone, but Uunchai isn’t willing to let go of the past.

As the story unfolds – backstories of the principal characters are revealed bit by bit, with separations, bereavements and misunderstandings causing lasting psychological damage – it becomes clear that the camaraderie between the three men and the hopes of reconciliation and filial (or familial) fealty that they nurture not only hide a lot of latent tension and emotional scars but also turn out to be disconcertingly misplaced.

The road trip takes them across the state of Uttar Pradesh with pit stops in Kanpur, Lucknow and Gorakhpur. Wherever the group goes, they only encounter disappointments and disputes but, like life, their journey goes on.

The screenplay gives the actors – the cast includes Neena Gupta as Shabina, Javed’s wife, and Sarika as Mala Trivedi, a stranger who joins of the group and causes a great deal of friction among the friends – ample room to demonstrate their skills. They do not miss out on the opportunity. Unfortunately, the story that they are a part of is bereft of any striking insights into what the vagaries of time do to people as they age and try to come to grips with life’s curveballs.

One of them asks another: Sab kuch kyun badal jaata hai(Why does everything change)? He follows that up with another related query: Sab kuch sthir kyun nahi rehta (Why doesn’t everything stay stable)? In response, the person to whom these questions are directed plays a song on his mobile from the 1972 Hindi film Piya Ka Ghar – Yeh jeevan hai iss Jeevan ka yahi hai, yahi hai rang roop. This number is employed to sum up the philosophy of Uunchai, a film as conformist in its messaging as any that Rajshri Productions has ever made.

Piya Ka Ghar is a Rajshri Productions film from exactly 50 years ago – which is how long the four pals in Uunchai have been friends. Shouldn’t the three surviving men and the makers of this film have been aware that nothing stays the same from one year to another and here we are talking several decades.

The Uunchai script brings in a millennial – Shraddha, a rebel who is determined to plough her own furrow no matter what the cost of her defiance is – to represent the zeitgeist. She clashes on several occasions with the three old men, but it is the latter who always manage to have their way.

Uunchai is steadfastly conservative in its approach to the questions that it tries to answer through the collective prism of four men who have faced more than their share of ups and downs in life. It touches upon a love lost, on a marriage cut short by untimely death, another disrupted by irreconcilable differences and the onset of clinical depression, and on a girl’s estrangement with her parents. The revelations, strewn across the film, are meant to be the dramatic high points. But they come and go without causing so much as a ripple.

The overlong Uunchai spends an inordinate amount of time holding forth on ageing, transience, mortality and the urge for freedom when old age threatens to change the pace and quality of life. Not that these are not important themes to tackle, but the treatment that Uunchai reserves for them borders on the preachy and syrupy.

A large part of the story is set in the Himalayas, which are captured translucently by cinematographer Manoj Kumar Khatoi. Is the eye-popping beauty of some of the frames the reason why the editor has been lenient with them? Uunchai needed a far sharper edit. Like Mount Everest, which can be spotted in the distance in several frames, the peak that the film seeks remains elusive.