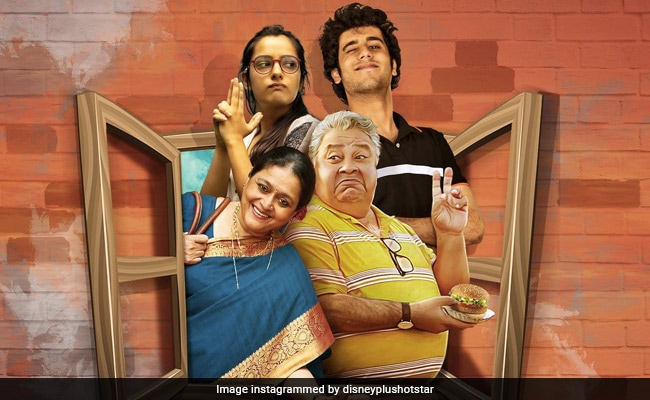 The dream of a home on one’s own patch of land drives the Joshis of Dehradun, a family of four, towards Gullak territory. One isn’t sure how much of this is intentional but Home Shanti is designed to squeeze the last ounce of mirth from middle-class minutiae.

Alas, with the writing struggling to sustain a steady stream of genuine humour and flashes of insight, Home Shanti merely hovers over the perimeter of its many tantalizing possibilities and never quite hits its straps. The primary reason this falls somewhat short of its goal is its steadfast soap-opera aesthetic.

Home Shanti is reminiscent more of the mid-1980s sitcom Yeh Jo Hai Zindagi – that, needless to say, isn’t necessarily a drawback – than of more recent slice-of-life comedy shows. That is not to say the Disney+Hotstar series directed and co-written by Aakanksha Dua has nothing going for it.

Home Shanti is definitely endearing in parts. It incorporates into its plot themes that touch a chord. It is another matter that it tends to wander off at times in less effective directions. It isn’t the sort of series that has you craving for more. It, however, ends on a note that indicates that another season might be on the way.

The performances by the seasoned Manoj Pahwa and Supriya Pathak are expectedly first-rate, the episodic storytelling is genteel notwithstanding the inconsistencies, and the struggles of a small-town family engaged in the life-altering act of constructing a dwelling are real and relatable.

Pahwa is a cricket-crazy Hindi poet, Umesh Joshi. The otherwise garrulous gentleman is petrified of public performance. He avoids kavi sammelans like the plague until a friend sweet-talks him into one. The experience yields a few piquant moments and a cash payment that goes a long way in changing the mood of the household.

Pathak plays Umesh’s wife, Sarla Joshi, a teacher of English and the vice-principal of a government school. It is time for the couple to vacate their official quarters because the latter has put in her papers and, 23 years into her marriage, decided to move on in life.

As Home Shanti kicks off, the Joshi family, completed by Jigyasa (Chakori Dwivedi) and her younger brother Naman (Poojan Chhabra), is preparing for a bhoomi pujan on the plot of land that they own on the periphery of Dehradun. It is a watershed, but barring the lady of the house none of the Joshis appears to aware of the importance of the ritual.

Umesh cannot get his attention away from a cricket match that he is watching on his mobile phone, Naman is bent upon having chicken momos on his way to the site (it is an auspicious day and non-veg is prohibited) and Jigyasa has her own secret plan for a trip to Shimla with friends on the pretext of a seminar.

They are all running late and Sarla Joshi is at her wit’s end. That however is obviously the least of their problems. The biggest challenge for them is to keep the over-enthusiastic, forever-in-a-hurry construction contractor Pappu Pathak (Happy Ranajit) in check.

Murphy’s Law kicks in and the going gets tough for the Joshis. Neither the subsequent events – the Bhoomi pujan and beyond – nor the elements work in their favour. But like all middle-class families that weather reverses as a matter of routine, Umesh and his brood are forced to think on their feet. They keep making mistakes, stumble repeatedly, gather themselves and keep running.

That is the pattern that Home Shanti sets for itself. Each of the six episodes is devoted to one step of the way towards completing the house – from drawing up the floor plan to engaging an interior designer to give finishing touches to the under-construction home, from laying the foundation to seeking government permissions.

There is many a slip between the power of hope and the actual building of the edifice. Smooth progress eludes the Joshis. Despite all the to-ing and fro-ing that ensues, Home Shanti isn’t the kind of rip-roaring comedy of errors you would expect it to be. The show chooses instead to be a low-key drama in which the humour arrives in little squirts and starts only to become scarce a bit too often.

A large part of the show is devoted to the fights between the Joshi siblings. It spills over into decisions regarding the construction of their home. The girl wants a bathroom to herself, the boy demands a gym. Their wishes fly in the face of Umesh and Sarla’s plan to create a dedicated study space so that they no longer have to use the dining table to write poetry or examine answer papers.

Sibling banter gives way frequently to serious altercations and the differences between husband and wife turns into full-blown shindies. Oftentimes, the neighbours get into the act and muddy the waters.

Manoj Pahwa and Supriya Pathak lead the way on the acting front. Chakori Dwivedi and Poojan Chhabra as the Joshi kids do their bit to shore up the show. Nutan Surya, who, as a cantankerous Naniji nobody wants anything to do with, makes her sporadic video-call appearances count.

The best thing about Home Shanti is that it steers clear of inanity. It does get many a home-truth across with a reasonable degree of success. Yet, even when the series, riding on the backs of Pathak and Pahwa, is at its best, it is only mildly diverting.

Home Shanti may not amount to a waste of three hours, but it stays trapped within the four walls of averageness.