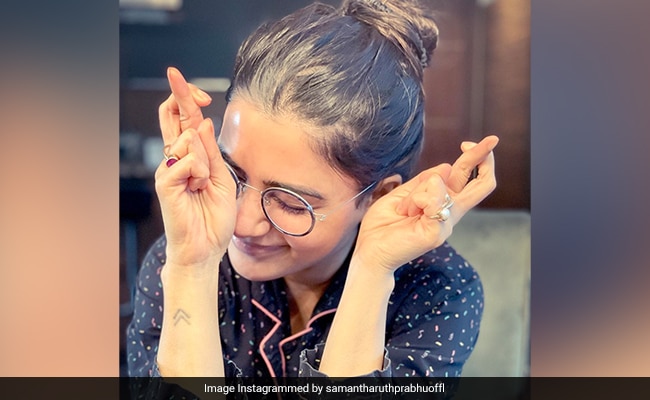 Samantha Ruth Prabhu‘s much-awaited film Yashoda will hit the theatres tomorrow, November 11, and the actress is “extremely nervous” but “excited” about the release. How do we know? It’s her latest update on Instagram. Samantha, who is currently battling an autoimmune condition called Myositis, shared a picture of herself with her fingers crossed and wrote, “Extremely nervous and especially excited. One day to go. Mee andhariki Yashoda nachchalani gattiga korukuntunna [I hope that you will like Yashoda]. Good vibes to my directors, producer, cast and entire crew as they wait like me for your verdict tomorrow. All fingers and toes crossed.” The hashtag read, “Yashoda from tomorrow.” Reacting to the post, actress Pearle Maaney wished Samantha “all the best” for her new film and added, “Waiting to watch the action scenes…Samantha, you glowing BTW.”

You can watch the trailer here:

Days after dropping the trailer, Samantha Ruth Prabhu revealed that she has been diagnosed with an autoimmune condition called Myositis. In a long note, Samantha said, “A few months back, I was diagnosed with an autoimmune condition called Myositis. I was hoping to share this after it had gone into remission. But it is taking a little longer than I hoped. I am slowly realising that we don’t always need to put up a strong front.”

Talking about her struggle, Samantha Ruth Prabhu added, “Accepting this vulnerability is something that I am still struggling with. The doctors are confident that I will make a complete recovery very soon. I have had good days and bad days…. physically and emotionally…. and even when it feels like I can’t handle one more day of this, somehow that moment passes. I guess it can only mean that I am one more day closer to recovery. I love you…This too shall pass.”

Apart from Telugu, Yashoda will release in Hindi, Tamil, Malayalam and Kannada. Samantha Ruth Prabhu also has Shaakuntalam in her kitty. She was last seen alongside Nayanthara and Vijay Sethupathi in Kaathuvaakula Rendu Kaadhal.