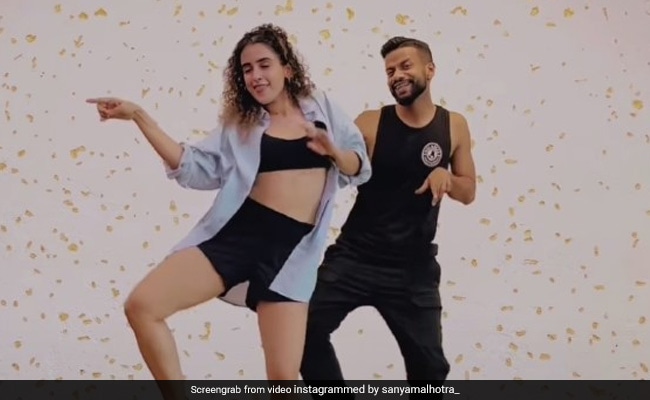 Sanya Malhotra in a still from the video. (courtesy: sanyamalhotra)

Sanya Malhotra’s dance videos are a sheer delight and her latest Instagram entry reminds us of just that. On Thursday, the Dangal star shared a super fun video of herself dancing with choreographer Shazeb Sheikh to the track Angelina by Raghav. (a remix of the song Mujhe Naulakha Mangawa De Re). Sanya Malhotra accompanied the post with an ROFL caption and she wrote: “Can someone wefast some Naulakhas to us.” She added the hashtag #shazebsheikhchoreography to her post. The post got a whole lot of love from the actress’ Instafam. Shraddha Kapoor too commented on the post. She dropped a fire, heart and a heart-eyed emoji. In a separate comment, Shraddha Kapoor wrote: “Moves like fieyah.” Couldn’t agree more.

Just in case you didn’t know what a fabulous dancer Sanya Malhotra is, here are some posts shared by the actor:

In terms of work, Sanya Malhotra has an impressive filmography. She was seen playing Vidya Balan’s daughter in Shakuntala Devi biopic. She also starred in Netflix’s Ludo. Sanya Malhotra made her Bollywood debut with the super hit film Dangal.