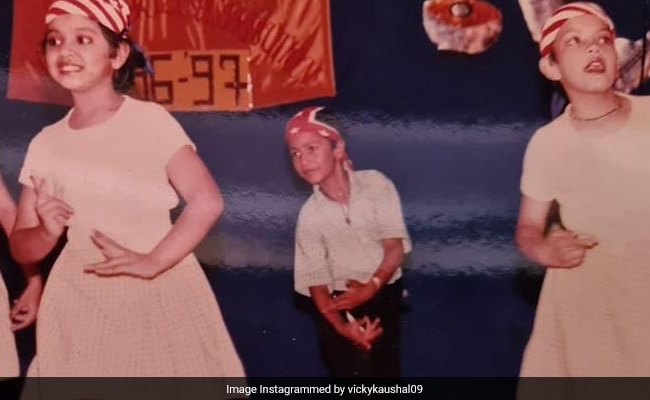 Vicky Kaushal may be playing a background dancer for the first time in his career in Govinda Naam Merabut he is not new to being one, per se. No, not in the movies but on stage as a child. Yes, Vicky Kaushal has shared an adorable throwback image of himself as a boy dancing behind a group of girls. The children are all wearing matching costumes at what appears to be a school event. In the image, young Vicky is seen dressed in a pair of denim pants and a T-shirt with a bandana to complete the look. Sharing the image, Vicky Kaushal said, “Background mein dance karne ka bohot experience hai life mein [I am a lot of experience as a background dancer]. #GovindaNaamMeraOnHotstar | Dec 16.”

Vicky Kaushal also recently shared a new song from the film. The track titled Bijli features himself alongside Kiara Advani and has the two dancing their hearts out. The song has been composed by the duo Sachin- Jigar and sung by Mika Singh, Neha Kakkar and Sachin- Jigar.

Vicky Kaushal shared a glimpse of the song – choreographed by Ganesh Acharya – and wrote, “It’s time to groove to the most electrifying tune of the season! #Bijli Song out now.” Replying to the post, Abhishek Bachchan dropped a fire emoji.

Before that Vicky Kaushal also shared images from the trailer launch of the film with his co-stars Kiara Advani and Bhumi Pednekar and said, “So happy to have finally shared the Trailer of #GovindaNaamMera with you all… there’s lots more masti, mystery and masala coming your way.”

Govinda Naam Mera has been directed by Shashank Khaitan and produced by Karan Johar’s Dharma Productions. It will be released on the OTT streaming platform Disney+ Hotstar on December 16.

On the work front, Vicky Kaushal will also be seen in Meghana Gulzar’s Sam Bahadur and Laxman Utekar’s next project with Sara Ali Khan.