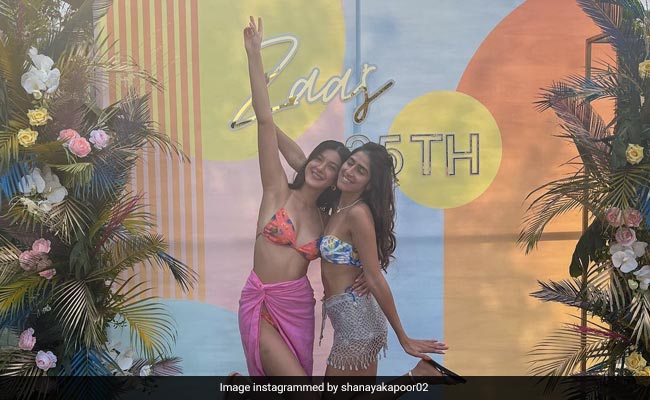 Shanaya Kapoor has shared some oh-so-amazing pictures from a poolside party. The album is all things happy. Shanaya is looking stunning. From a goofy group photo to time spent in the pool, Shanaya is having a blast. The snapshots are refreshing, to say the least. For the caption, she wrote, “Say” and added cheese and a red heart emojis. And, the last frame in the album has our hearts. It is a sun-kissed picture of Shanaya. She is a sight to behold. Maheep Kapoor was the first one to drop a set of red hearts under the photo. Fans too have flooded the comment section with fire, hearts and heart-eye emojis.

Shanaya Kapoor has a thing for beachwear. Don’t believe us? Take a look at her “aqua baby” post. It will clear all your doubts. The picture is from Shanaya’s Dubai getaway.

Now, take a look at Shanaya Kapoor’s “pool day with my favourites”. Yes, it includes her BFFs Ananya Panday and Suhana Khan

Shanaya Kapoor is all set to make her Bollywood debut with Karan Johar’s Bedhadak. The film is directed by Shashank Khaitan. Lakshya and Gurfateh are also part of the project. Along with the first look posters, Shanaya wrote, “A new era of love is filled with passion, intensity and boundaries that will be crossed. Presenting Bedhadak where I get to share the screen with my suave co-actors, Lakshya and Gurfateh – directed by the one and only Shashank Khaitan.”

For those who don’t know, Shanaya Kapoor was seen in a cameo appearance in the Netflix show Fabulous Lives of Bollywood Wives, which featured her mother Maheep Kapoor, Bhavana Pandey, Seema Khan and Neelam. Shanaya had also worked as an assistant director in Gunjan Saxena: The Kargil Girl.