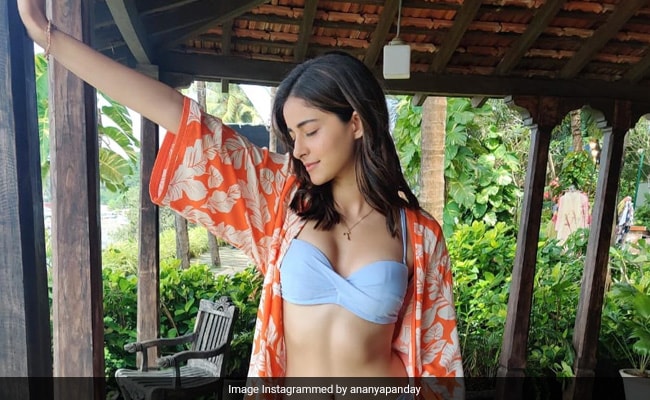 Ananya Panday, in a throwback state of mind, shared two stunning pictures of herself from the sets of Gehraiyaan. In the picture, Ananya can be seen dressed in powder blue swimwear with a printed orange cape. She captioned the post: “When continuity pictures aren’t so bad. Throwback to Gehraiyaan dayzzz.” The actress was last seen in Shakun Batra’s Gehraiyaan, co-starring Deepika Padukone, Siddhant Chaturvedi and Dhairya Karwa. The comments section of Ananya’s post was filled with comments from her friends and Instafam. Shanaya Kapoor wrote “Anne” along with heart-eyed emojis. Suhana Khan commented: “Oh wowwww.” Maheep Kapoor dropped fire emojis.

This is what Ananya Panday posted:

Ananya Panday, daughter of Bollywood actor Chunky and Bhavana Pandey, made her Bollywood debut in the year 2019 with Dharma Productions’ Student Of The Year 2, co-starring Tiger Shroff and Tara Sutaria. Ananya also featured in Pati Patni Aur Woh, co-starring Kartik Aaryan and Bhumi Pednekar. She also starred in Khaali Peeli, with Ishaan Khatter. She will next be seen in Kho Gaye Hum Kahan and Liger.

Shanaya Kapoor (daughter of Maheep and Sanjay Kapoor) will make her Bollywood debut with Dharma Productions’ Bedhadak. Suhana Khan (daughter of SRK and Gauri Khan) will step into films with The Archies, co-starring Khushi Kapoor and Agastya Nanda. The film will be directed by Zoya Akhtar.