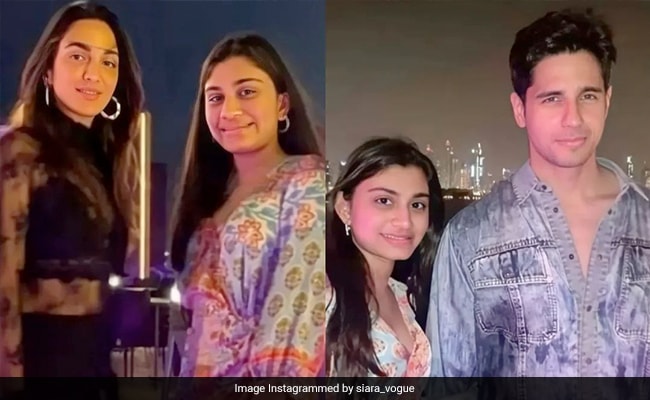 Kiara Advani is celebrating her 30th birthday today (July 31) in Dubai with her rumoured boyfriend, Sidharth Malhotra. How do we know? Several pictures of the duo with fans are going viral on the internet. However, they are posing separately with the fans. In one of the pictures, Kiara can be seen in a black ensemble, while in another, Sidharth looks dapper in a denim shirt and black jeans. Sidharth and Kiara often have been in the news over their rumoured relationship. Check out the viral pictures below:

Sidharth Malhotra and Kiara Advani, who have worked together in the movie Shershaah, are rumoured to be dating for a while now. Often the two are spotted at the events together. However, the couple is yet to officially confirm the news. Earlier, rumours were doing rounds that the couple parted ways, but they rubbished it by attending Salman Khan’s sister Arpita Khan’s Eid party together.

Meanwhile, Ananya Panday, in the recent episode of Karan Johar’s chat show, Koffee With Karan 7, hinted that Sidharth and Kiara are dating. When Karan Johar asked about the relationship status of Kiara, she said, “Her raatans are very lambiyan” (referring to the Shershaah song Raataan Lambiyan) and then, jokingly added, “Wake up Sid.”

In terms of work, Kiara Advani is basking on the success of her recently released movies Bhool Bhulaiyaa 2 with Kartik Aaryan and Jugjugg Jeeyo with Varun Dhawan. Next, she will be seen in Govinda Naam Mera and RC15, co-starring Ram Charan.

On the other hand, Sidharth Malhotra has several films in his kitty – Mission Majnu, Thank God and Yodha.