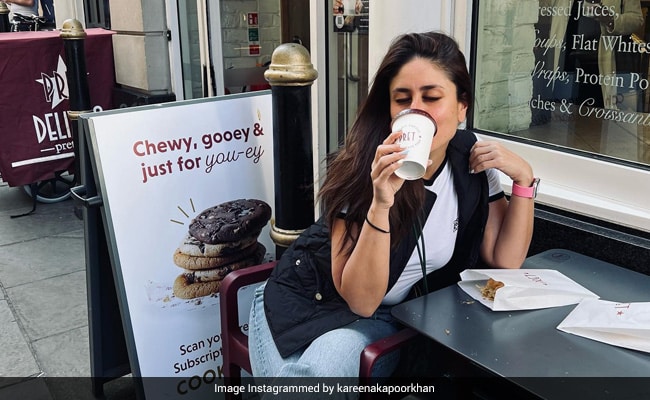 Kareena Kapoor, who is on vacation after wrapping up The Devotion Of Suspect X, is having the time of her life as she enjoys her coffee after two years from her favourite restaurant in London. The actress has shared a post on her Instagram handle from a picturesque location wherein she can be seen sipping her coffee. In the image, Kareena looks pretty in a white t-shirt and blue jeans layered with a black jacket. The actress has left her hair open and is sporting mascara-laden eyes. Sharing the image, she wrote, “Waited two years for you baby Pret #Sipping my coffee Coffee Lover”.

Soon after Kareena Kapoor shared the post, her The Devotion of Suspect X co-star Jaideep Ahlawat dropped a comment that read, ” Yeeee Yeeee … Vacation time … after so much hard work. Enjoy.”

A few days ago, Kareena Kapoor shared several pictures from the last day of the shooting of The Devotion Of Suspect X. The post featured director Sujoy Ghosh, co-stars Jaideep Ahlawat and Vijay Varma, husband Saif Ali Khan, son Taimur and the whole crew. Sharing the picture, Kareena captioned it as “DSX! The best crew, best ride, best times… and I’m pretty sure the best film too”. Check out below:

On Friday, Kareena Kapoor shared an adorable picture with her son, Taimur Ali Khan, and captioned it as, “Last day visitor on set…got his vibe on…ready for the summer holidays…No pictures Amma…ufff just like his father #DSX Last Day #Ready for Summer 2022 Bro #My TimTim”.

Meanwhile, on the work front, Kareena Kapoor is gearing up for the release of her much-delayed movie Laal Singh  Chaddha, co-starring Aamir Khan. The film is slated to release on August 11.