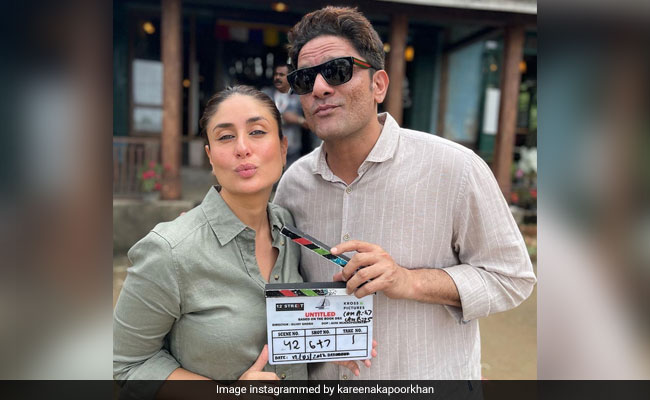 Kareena Kapoor and her The Devotion Of Suspect X co-star Jaideep Ahlawat shared a few fun BTS moments from the sets of the film on their social media on Thursday. Jaideep Ahlawat shared a picture of himself and Kareena pouting. The Paatal Lok star captioned the post: “So much “Devotion” in learning how to pout from ‘The Best’ and I failed miserably. Day 1 completed together and a long journey ahead with the one and only “The Bebo”, the gorgeous.” Kareena Kapoor re-posted the selfie and she wrote: “Getting one of the finest performers to do his toughest performance… The pout. So much to learn from each other.”

Kareena Kapoor checked into the shoot location on Wednesday and shared picture of the scenic view. “Day1- Kalimpong…The Devotion Of Suspect X,” she captioned the post.

Kareena Kapoor and Vijay Varma too had their share of fun. He recreated the popular K3G dialogue, Kareena gave priceless expressions.

The film will be directed by Sujoy Ghosh and it will release on Netflix. Besides The Devotion Of Suspect X, Kareena Kapoor will also be seen in Aamir Khan’s Laal Singh Chaddha, which is a remake of the 1994 classic Forrest Gump.

The actress was last seen in the 2020 film Angrezi Medium, co-starring late actor Irrfan Khan, and actress Radhika Madan. She will also co-produce a film with Ekta Kapoor.