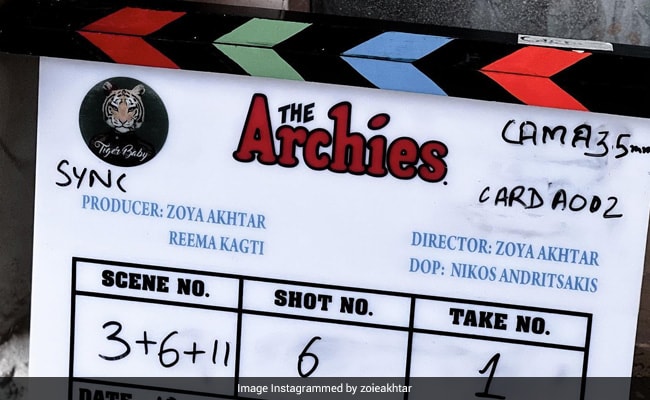 You cannot claim to be a Bollywood fan if you are not aware of TheArchies comics getting a desi twist under the genius directorial gaze of Zoya Akhtar. The adaptation for OTT giant Netflix has been in the news for its lead cast of debutant Bollywood star kids including Shah Rukh Khan’s daughter Suhana Khan, Amitabh Bachchan’s grandson Agastya Nanda and the late Sridevi’s daughter Khushi Kapoor. Now, Zoya Akhtar has teased fans with a sneak peek from the first day of shoot on Instagram. The Luck By Chance director shared a photo of the clapboard with details of the project. It states that the film is being produced by Zoya Akhtar and Reema Kagti, with Zoya Akhtar also serving as director and Nikos Andritsakis as the director of photography.

Sharing the picture, Zoya Akhtar wrote, “Back to The Future,” and the hashtags “The Archies” and “supercalifragilisticexpialidocious”. Other details such as the “shot” number and the “take” number are also visible on the clapboard.

In March, pictures of the lead cast went viral on Instagram with Suhana, Khushi and Agastya captured in their character costumes. As per the pictures that went viral, it looked like Suhana Khan in her centre-parted dark hair will be playing Veronica Lodge, while Khushi Kapoor with her sweater vest and bangs looked like she was ready to step into the shoes of Betty Cooper. And needless to say, Agastya Nanda will be playing Archie Andrews in the much-awaited film. Read all about it here.

Zoya Akhtar announced her association with the project in an Instagram post in 2021. The announcement was designed to resemble pages of a comic book, culminating in the characters staring at a board that says, “The Archies, a film by Zoya Akhtar. Coming to Netflix.” In the caption, she wrote, “Archie and the Crew are about to get Down and Desi! ‘The Archies‘. A coming-of-age musical drama directed by me. Coming soon to Netflix.”

Created by John L Goldwater and artist Bob Montana in 1941, the character Archie Andrews first appeared in the Pep Comics and soon became an iconic character in pop culture across the world. Characters from The Archie comics have been immortalised by several adaptions of films and cartoon series in various countries and languages.