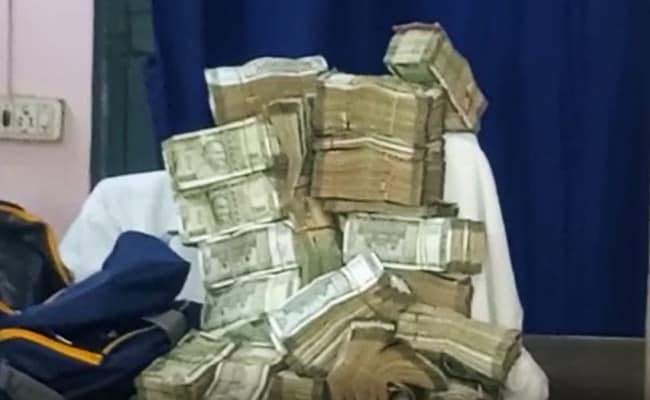 Police in West Bengal’s Howrah district today seized “a huge amount of cash” from a car in which three Congress MLAs from Jharkhand were travelling, leading to allegations of political “horse-trading”. The three — Irfan Ansari, Rajesh Kachhap and Naman Bixal Kongari — have been detained for questioning about the source of the money, and note-counting machines will have to be used to determine the exact amount, police said.

Their car, a Toyota Fortuner SUV, had a board saying ‘Jamtara MLA’, which is Irfan Ansari. Mr Kachhap is MLA from Khijri, Mr Kongari from Kolebira. There was no response yet from them, but the Congress said they were given the money by the BJP to topple the Jharkhand Mukti Morcha-Congress alliance government. “It is in BJP’s nature to try and destabilise any government that’s not theirs,” Bandhu Tirkey, Jharkhand Congress Working President, told news agency ANI.

Jharkhand BJP leader Aditya Sahu, however, alleged that the money is proof of JMM-Congress corruption. “Ever since they came to power, corruption is on the rise. They use public money for other purposes,” he told the news agency.

Political questions were shot from Bengal, too. In a tweet, the ruling Trinamool Congress referred to “murmurs of horse-trading and the possible toppling of the Jharkhand government”. Chief Minister and Trinamool boss Mamata Banerjee had recently accused the BJP of trying to force a change of government in Jharkhand after the recent change in Maharashtra. The BJP did not react specifically to this.

Amidst murmurs of horse-trading and the possible toppling of the Jharkhand Govt. 3 @INCJharkhand were found carrying huge sums of cash to Bengal.

What is the source of this money? Will any Central Agency take suo moto cognizance?
Or do the rules apply to a select few? https://t.co/hZzvqienx6

Some leaders from the Bengal government — recently stung by piles of cash recovered from an aide of arrested party leader Partha Chatterjee — also poked the Enforcement Directorate (ED), asking if action would be taken against those who aren’t from the Trinamool. Minister Shashi Panja shared a video tweeted by a journalist and wrote, “ED, are you taking a note or the matter is not grievous enough?”

The Trinamool has been alleging that it’s being selectively targeted by the BJP through central government agencies.

As for the cash seizure, police said the SUV was stopped near Panchla village and the money found in bags. “We had specific information that huge sums are being transported,” said Swati Bhangalia, Superintendent of Police of Howrah Rural, adjoining Kolkata.

“We worked out the details and are asking the three MLAs from Jharkhand for details and proofs about the cash. Counting of the amount and other legal formalities will follow,” she added.

There were two others in the car, including a driver, it is learnt.