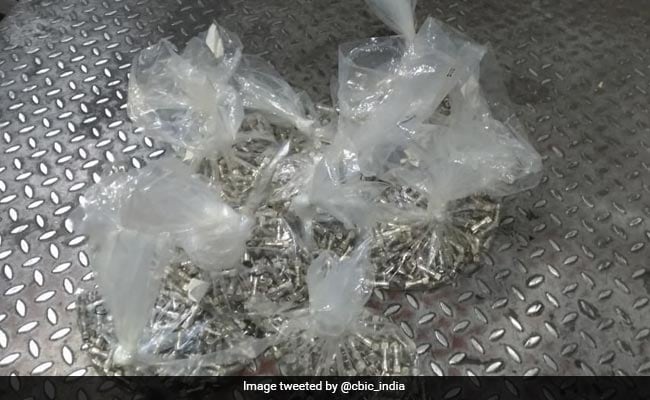 The consignment which was declared to have contained triangle valves, had originated from China.

Revenue intelligence officers intercepted a consignment at Delhi air cargo complex and recovered 61.5 kilograms of smuggled gold having a market value of Rs 32.5 crore, the finance ministry said on Thursday.

In a covert intelligence operation code-named ‘Golden Tap’, the officers of the Directorate of Revenue Intelligence (DRI) intercepted the consignment on May 11, on the suspicion that it might have smuggled gold concealed therein.

The consignment which was declared to have contained triangle valves, had originated from Guangzhou, China, and arrived at the Indira Gandhi International (IGI) Airport by a Japan Airlines flight.

After a thorough and prolonged examination which continued till early Thursday morning, a large number of the imported triangle valves were found to have 24-karat gold concealed in them.

“After an intensive examination, the officers of DRI were able to recover 61.5 kilograms of gold having a market value of Rs 32.5 crore from the consignment. The recovered gold, found to be of 99 per cent purity, has been seized,” the ministry said in a statement.

This detection comes on the heels of other recent seizures of gold from air cargo and courier consignments made by the agency. These include the seizures of 11 kg of gold worth more than Rs 5.88 crore in Lucknow and Mumbai in May, 2022 and previous seizures of 16.79 kg gold, valued at Rs 8 crore, from a courier consignment in July, 2021, followed by the seizure of 80.13 kg gold worth Rs 39.31 crore in November, 2021 from an air cargo consignment — both at New Delhi. PTI JD HVA