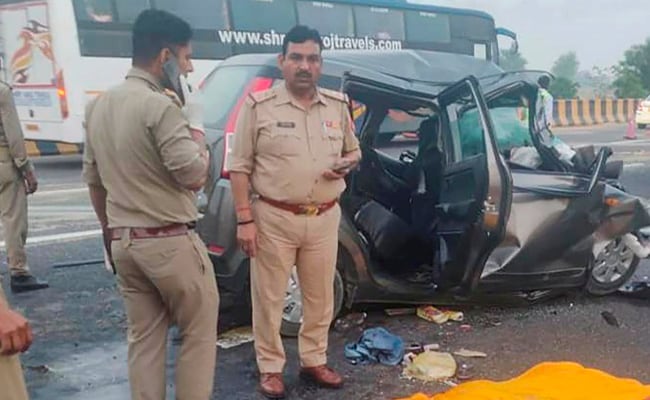 7 people, returning from a wedding, died in a car crash on Yamuna Expressway in Mathura

Seven people died and two were injured in a car accident on the Yamuna Expressway in Mathura on Saturday morning, police said.

All those who died were members of the same family and were returning to Noida from Hardoi after attending a wedding. The accident happened when their car collided with an unknown vehicle around 5 am, they said.

Two people sustained injuries in the accident and were hospitalised, the police said.

Superintendent of Police (Rural) Shrish Chandra said the passengers of the car were from UP’s Hardoi district and were returning to Noida, where they live currently, reported Press Trust of India.

“Around 5 am on Saturday, the car crashed into an unknown vehicle. Since the car was moving at a high speed, seven people died immediately, while two were seriously injured,” he said.

“Among the seven killed, three are women, three men and one child died on the spot. Another child and a man are hospitalised,” Mathura’s Superintendent of Police told news agency ANI.

Prime Minister Narendra Modi expressed his condolences to the families of the victims. “The road accident in Mathura, Uttar Pradesh is heart-wrenching. My deepest condolences to those who have lost their loved ones in this accident. With this I wish the injured a speedy recovery,” the PM’s Office tweeted in Hindi.

Uttar Pradesh Chief Minister Yogi Adityanath also expressed grief over the loss of lives in the accident, and directed the administration to provide adequate treatment to those injured.

The bodies have been sent for a forensic examination, and their family members have been informed, the police added.

(Inputs from PTI and ANI)