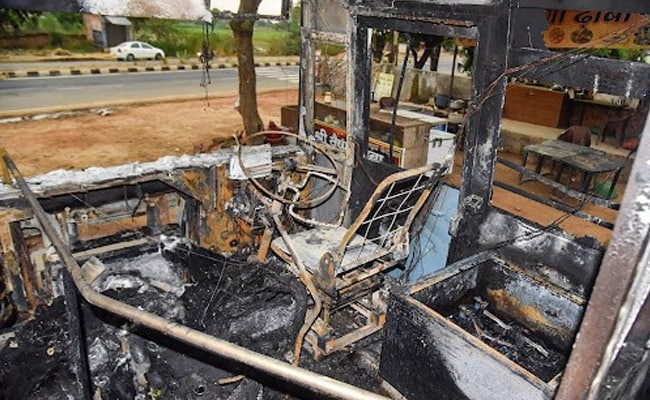 35 people, including nine operators of coaching institutes, were arrested for their role.

Police in Uttar Pradesh’s Aligarh have so far taken around 80 people in custody in connection with the violent protests in the district against the centre’s Agnipath scheme, officials said on Saturday.

Of those held since the protests on Friday, 35 people, including nine operators of coaching institutes, were arrested for their role in the violence, Aligarh Senior Superintendent of Police (SSP) Kalanidhi Naithani said.

“Four FIRs have been registered under serious charges of the Indian Penal Code in connection with the violence during the protests in the district. Two of these FIRs have been lodged on complaint by police personnel, one by the UP roadways and another by a civilian,” the senior police officer said.

“Efforts for arresting those engaged in violence had started on Friday itself. So far, around 80 people have been taken into custody,” he said.

Police are keeping a close eye on social media and the role of the nine operators of the coaching institutes emerged during the protest by youngsters, the officer said.

“The coaching operators had provoked the anti-social elements and triggered to carry out such acts during the protests amidst the (armed forces) aspirants,” he said.

Other people in police custody are being questioned and further action will be taken on the basis of evidence in the case, he said.

He said the law and order situation which had taken a hit due to the protests on Friday remained under control on Saturday as police conducted flag marches in view of the tense condition.

Police are conducting peace meetings and also taking support of prominent people in maintaining an atmosphere of calm in Aligarh, the officer added.

The centre had on Tuesday unveiled the Agnipath scheme for a four-year term recruitment for aspirants aged between 17.5 and 21 years into the three armed forces.

However, the announcement triggered violent protests in various parts of the country, including Aligarh, even as the debate intensified over the pros and cons of the initiative, aimed at transforming the armed forces.