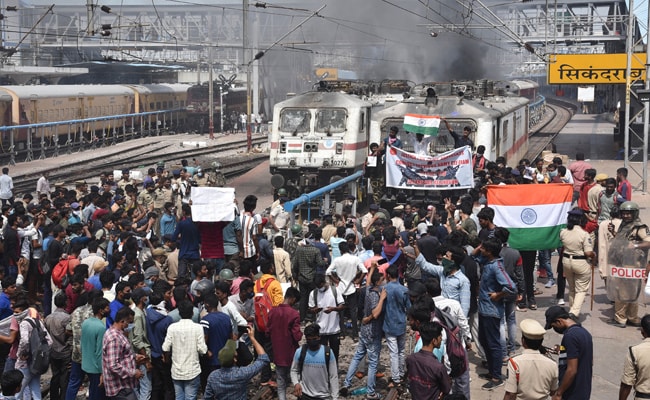 Avula Subba Rao is allegedly the mastermind behind the violence (File)

An ex-Armyman has been arrested in connection with the Friday’s violence at Secunderabad railway station in Telangana over the ‘Agnipath’ recruitment scheme, the police said.

Avula Subba Rao is allegedly the mastermind behind the violence wherein several trains were set on fire by the protesters, while one person was killed when police opened fire to disperse the mob, officials said.

He reportedly created WhatsApp groups to mobilise the mob and played a key role in arson and vandalism in Secunderabad.

Mr Rao is from Prakasam district in Andhra Pradesh and has been running a training academy for army aspirants that has branches in Narsaraopet, Hyderabad and at least seven other places for the past few years.

He was apprehended by the police for questioning on Saturday.

19-year-old Rajesh from Warangal was killed while more than a dozen were injured on Friday as thousands of demonstrators gathered at the railway station and attacked three passenger trains, burning down coaches, and destroying public property.

Police have detained several people in connection with the violence from Adoni, Kurnool, Guntur, Nellore, Amadalavalasa, Visakhapatnam and Yalamanchili.

The agitation broke out in several states after the government unveiled the ‘Agnipath’ scheme on Tuesday for the recruitment of soldiers in the Army, Navy and the Air Force, on a four-year short-term contractual basis.

Under the scheme, people between the age of 17.5 years and 23 years will be inducted into the services for a four-year tenure. During this period, they will be paid a monthly salary between Rs 30,000-40,000 plus allowances, followed by compulsory retirement for most without gratuity and pension benefits.