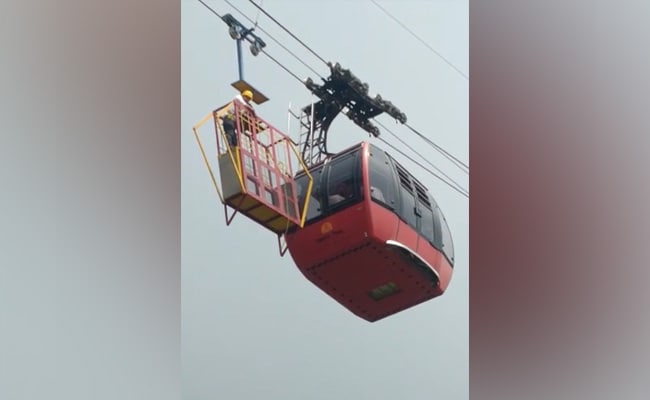 All 11 people onboard were rescued after they were stranded for more than three hours in a cable car that stopped midway in Himachal Pradesh’s Parwanoo on Monday afternoon. “I will seek a report on what went wrong,” Chief Minister Jai Ram Thakur said, who had reached the spot.

A rescue trolley was deployed on the cable to get the passengers out, according to the Solan district police chief Virendra Sharma. They were lowered, one at a time, onto a hill in the Kaushalya river valley below using harnesses.

The cable car is a popular feature of the Timber Trail private resort, about 35 kilometres from Chandigarh on the route to Kasauli and Shimla. It is frequented by people from across the region as Parwanoo is at the cusp of Himachal Pradesh with Haryana, Punjab and Chandigarh.

The technical team of the Timber Trail operator was deployed and police team was monitoring the situation, the superintendent of police told ANI. A team of the National Disaster Response Force was also at the spot.

Just after the cable car got stuck, some of the elderly tourists among those stranded had put out a video detailing why it was worse for them. “I am a diabetes and kidney patient. They are saying the same thing again and again – that we will be rescued using the ropeway. We are not fit to be taken out like this,” said an elderly man.

Monday’s incident brought back memories of a similar incident at Timber Trail in October 1992, when 10 passengers were rescued in an operation by the Army and Air Force; the cable car operator had died.

The Indian Armed Forces had some months ago shared on their official Instagram handle a post carrying three pictures from the time the rescue operation was undertaken. The first photo showed the cable car — with Timber Trail Parwanoo written on it – hanging in the air. Another photo showed a tourist being lifted to the helicopter of the Indian Air Force, while the third one was a group photograph of officers and some rescued passengers.

At that time, only half of the passengers could be rescued at first, before it got dark. The team had to temporarily halt the operation but managed to get the others out the next day. The operator had tried to jump out to safety immediately after the cable car went out of control; but died as his head hit a rock.