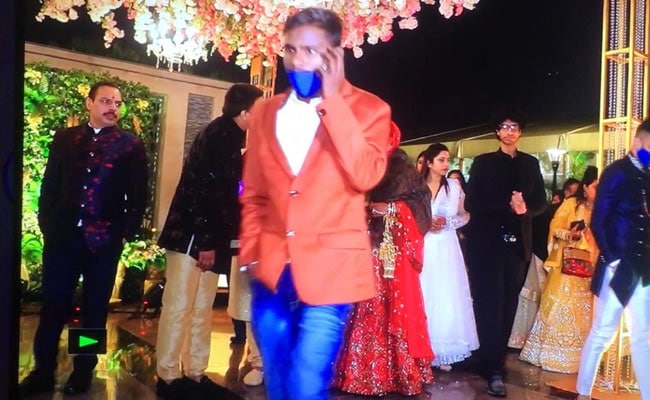 Accused Bishal (in red coat) seen at a wedding venue in November.

The Delhi Police has arrested seven members, including two juveniles, of a gang named “Band Baaja Baraat”, who attended big fat weddings in the city uninvited and indulged in theft, officials said on Friday.

The gang also used juveniles to steal at wedding ceremonies, they said, adding that they were also trained not to divulge names of other members if caught.

During the wedding season, the gang would visit Delhi, NCR and other cities in north India to commit theft at wedding venues, police said.

The police said the gang also “leased” children of villagers on a one year contract at Rs 10 to 12 lakh, and used them to steal at these venues.

Five members of the gang were arrested while two juveniles were apprehended on December 2 when they were leaving Delhi and travelling to their village in Madhya Pradesh, they said.

The gang members hail from a small village named Gulkheri in Rajgarh district of the state.

Police said a probe was initiated after a lot of incidents were reported about a specific gang committing thefts at wedding venues.

As part of investigation, the police formed a team which analysed all the available video footage of the wedding ceremonies where thefts had taken place and also deployed informers at prominent banquet halls, farmhouses and other venues to gather intelligence about the suspects, said Shibesh Singh, Additional Commissioner of Police (Crime).

“It was revealed from the video footage that the suspects, before committing theft, spent considerable time at the venues, making themselves comfortable and familiar with the guests.

“They dressed well, mingled with guests, had their dinner there and patiently waited for the opportune time to strike. In a swift move, they stole the gift bags containing jewellery and cash and thereafter quickly vanished from the venue,” he said.

During interrogation, the accused disclosed that in their villages, children between the ages of 9-15 years are ”leased” to gangs like theirs by their parents, police said.

The children are leased for Rs 10 lakh to Rs 12 lakh, depending on their skills, the officer said.

“Once a child is hired, they are brought to Delhi and trained for a month on how to commit thefts at weddings and how to mingle with the people at the venue. They are told not to divulge their identity and that of their gang members in case they are caught,” he said.

Police claimed that with the arrest of the five accused, eight cases of theft at wedding venues have been solved. Around Rs 4 lakhs in cash, jewellery and mobile phones have been recovered, police said.

Delhi May Witness Drop In Temperature After Wednesday: Weather Official